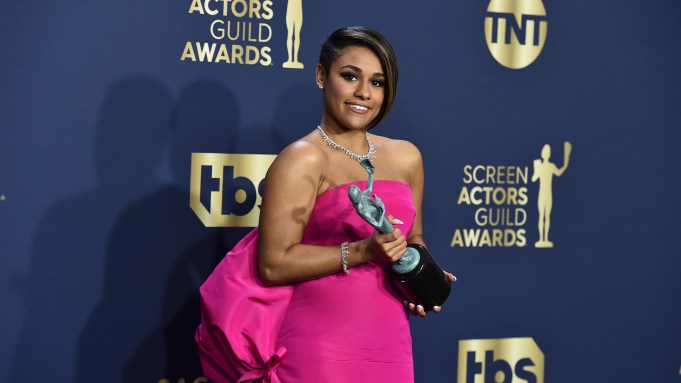 Ariana DeBose’s rise to stardom was cemented at Sunday night’s 2022 SAG Awards, where the Afro-Latina actress continued her winning streak when she won the award for her role in Steven Spielberg’s “West Side Story.”

DeBose, who is the first Latina to win a film award from the Screen Actors Guild and first LGBTQ woman of color to be recognized for acting, marked the groundbreaking win in her latest standout fashion moment — a bright fuchsia Valentino spring 2022 couture gown paired with De Beers diamonds — that came together in collaboration with her stylists Zadrian Smith and Sarah Edmiston.

When speaking Monday morning over Zoom, both stylists started off the interview gushing over DeBose’s championing nature and how she made a point to include her entire team in her win.

“This is how glass ceilings are shattered,” Smith said. “Ariana is in such a very special position as an Afro-Latina, queer women. She’s already breaking ceilings for herself, but for her to be, like ‘I can also break ceilings for Zadrian who is a Black gay man from the south or Sarah who is an Irish working mom.’ She’s making sure she’s holding the hands of everyone on her team.”

When it came to her SAG Awards look, the stylists explained that DeBose was highly involved in the process and that it was important for them all to work with a design house that shared their same morals and values.

The stylists ultimately looked to Pierpaolo Piccioli at Valentino who Smith described as “a designer who has done this work for a longstanding time” and highlighted the creative director’s spring 2022 couture collection, called “Anatomy of Couture,” which celebrated models of different sizes, ages and races.

Edmiston explained that DeBose “looked like love” in the Valentino couture dress, which had an orchid-like ruching at the back and was inspired by a gown Valentino Garavani created in 2002.

“She can carry a dress that is love,” she said. “On most other people, honestly, that dress would have worn them, but not for Ariana. For her, it was a perfect fit because she is such a huge spirit, huge personality and has a huge heart that she can wear a dress that is basically a huge heart.”

DeBose’s 2022 SAG Awards gown is just one of her many standout fashion moments in the last few months. During the press tour for “West Side Story,” the actress wore an array of high-fashion, colorful looks by Armani, Michael Kors, Gabriela Hearst, Fendi and others. Most recently, DeBose stunned at the NAACP Image Awards on Saturday wearing a crystal-embellished look from Alexander McQueen’s spring 2022 collection.

“It’s classic Americana with a twist,” Smith said about DeBose’s style. “Her references are such old school Hollywood, but I think she modernizes it. She loves classic silhouettes and classic shapes, and where Sarah and I come in and remix it is with an amazing color or an amazing detail.”

While the stylists stayed mum on what to expect from DeBose’s upcoming awards show looks, they offered that her fashion will remain authentic and reflect her personality.

“Her style is a celebration of all the nuances of her,” Edmiston said. “She is a multifaceted, wildly interesting woman and her style is defined by all of those parts of her. At our studio, we love the layered and nuanced human. A human with a journey and we draw from all of those things and that’s where the story comes from. We’re just narrators of what people have lived and where they’re living now.”

Click through the above gallery for more photos of Ariana DeBose’s style.

The Best Dressed Celebrities at the 2022 SAG Awards

Lady Gaga Dazzles in Armani Privé at the 2022 SAG Awards