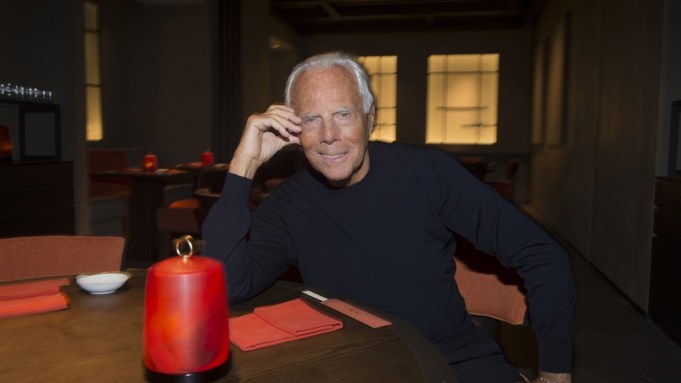 TWILIGHT ZONE: Mini vegetarian tacos and tiny rice cubes were among the nibbles passed around Friday night when Giorgio Armani hosted a cocktail to show off Armani/Nobu’s new décor in Milan. Such dishes would suit the fitness-focused designer fine, as he noted he doesn’t eat much meat.

“The chef upstairs is outstanding,” Armani said, noting he’s a regular at the sprawling eatery.

“My Own Worst Enemy” actress Bella Thorne and filmmaker Paolo Sorrentini were among the guests swarming around Armani in the main-floor bar, before they repaired upstairs for more typical Japanese fare.

Sorrentino, who won an Oscar for “The Great Beauty,” said Armani was “the first person that believed in my work,” outfitting the director at the 2004 Cannes film festival when he premiered “The Consequences of Love.”

“It’s about a friendship between two older guys, and how they see the future,” he said, musing that he wanted to get a jump on understanding what his twilight years might be like.