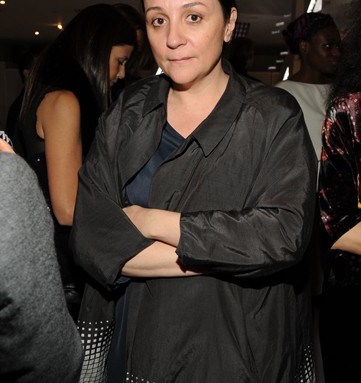 ARMY BRATS: People’s Revolution’s Kelly Cutrone and Robyn Berkley have joined forces with Chris Burch to launch The Electric Love Army sportswear label. Cutrone, who headlined Bravo’s “Kell on Earth” show and now is a correspondent for “Dr. Phil,” described the brand as “affordable and fun.” The Electric Love Army, which will also have freestanding stores, plans to play up pop culture references to appeal to women between the ages of 15 and 32, who are both brainy and sexy. “You know that scene in ‘Fast Times at Ridgemont High’ where Phoebe Cates climbs out of the swimming pool and pops her bikini ? That’s our girl,” Cutrone said.

TOO SKINNY: Jeans have never gotten so much talk-show play. First, Conan O’Brien went on air wearing jeggings last December. Then, on Monday, Stephen Colbert decried on “The Colbert Report” that the “skinnification of the American jeanscape has gone too far.” “First, it was tapered cut, then shrink-to-fit, then slim-fit boot cut, then slouchy slim, then skinny fit. Enough. We get it — you’re in a band,” he exclaimed.

Colbert singled out Levi’s Ex-Girlfriend skinny jeans as a top offender. “There were baggier pants on the dudes in ‘Black Swan,’” he zinged. In reply, Levi’s questioned Colbert’s commitment to jean-ocracy. “At Levi’s, we think sexy comes in all shapes and sizes and can only hope that Mr. Colbert finds peace with his inner hipster,” said a Levi’s spokesman. “We believe in the inalienable rights of life, liberty and the pursuit of ever-skinnier jeans.” The company pointed out that the skinny male style has racked up more than 8,000 “likes” on its Facebook application and has received a “pretty positive response” on levi.com. Perhaps if the skinny craze hits suit pants, Colbert should consider joining the band or at least jumping on the bandwagon.

NOT SO GLORY DAYS: Panelists at Wednesday night’s “Entrepreneurship” discussion weren’t afraid to bare a few battle wounds. Moderator Karen Harvey, whose consulting group co-hosted the Milk Studios event with Fashion Group International, helped coax them along, by asking about their worst jobs. Rent The Runway’s Jenny Fleiss recalled how her Wall Street life called for some nights spent sleeping under her desk. Her co-founder Jennifer Hyman said punching the clock in a corporate culture that pushed people down was not her thing.

Opening Ceremony co-owners Carol Lim and Humberto Leon said they too were not cut out for the corporate life, but Lim’s darkest work day happened in their second year in business together. The pair’s one computer doubled as a POS terminal. Diligent as she had been about backing up the information daily, there was a two- to three-month stretch where she waffled, the computer crashed and all those sales went up in smoke. Needless to say, an IT person was soon hired.

Vena Cava’s Lisa Mayock and Sophie Buhai remembered how they lined up $10,000 in orders at their first trunk show even though they had no idea how or where to actually produce the clothes. Mayock resorted to going door-to-door in Eighth Avenue buildings that looked large enough to house factories. Buhai said, “Failure is sometimes what drives you. We didn’t get chosen to show in Parsons’ senior show. That’s how the whole idea for our company started.”

MARIA PINTO’S NEXT STEP: After shuttering her store and design business last March, Chicago designer Maria Pinto, who gained national recognition for dressing First Lady Michelle Obama on the campaign trial, has reemerged as the new creative director for women’s fashions for Mark Shale, a men’s and women’s specialty store with three locations in the Chicago area. Pinto, who was in New York last week for buying appointments, will oversee women’s buying and visual merchandising. “Fall will really have the impact of my efforts,” said Pinto, who has introduced Hugo Boss and René Lezard into the retailer’s mix. Pinto’s appointment is part of an overall revitalization for Mark Shale, which plans to soon unveil a new marketing campaign and Web site.

GUESS’ NEW GAL: Amber Heard will be the new Guess girl, making her debut in the fall 2011 campaign to be shot by Ellen Von Unwerth next week in Los Angeles. “I am so excited I can hardly contain myself,” said the “Drive Angry” and “Rum Diaries” actress, who has just signed on for the new NBC drama “Playboy.” “It’s such an iconic brand and I get to join the ranks of Claudia Schiffer, Drew Barrymore and Laetitia Casta. It’s good company to have,” she said, adding, “And the jeans fit me perfectly.” For her part, Von Unwerth was just as excited to shoot the 24-year-old actress. “She’s tall, with an incredible figure and those green eyes. She’s got movie star quality.” Paul Marciano, chief executive officer and creative director for Guess Inc. said of Heard, “She embodies the essence of the true Guess girl with her natural beauty and classic all-American good looks.”

ALICE AT THE PALACE: Alice Temperley paid a visit to Buckingham Palace Tuesday to collect her MBE, or Member of the Order of the British Empire, honor from Queen Elizabeth II. Temperley was awarded the honor for her contribution to the British fashion industry. The designer wore a black jacket and pants suit from her fall collection, which she teamed with a black-and-white shirt from her label’s cruise line and a jaunty black trilby.

That afternoon, Temperley celebrated with a lunch at chef Mark Hix’s Soho restaurant, which was hosted by Hix himself. Later on Tuesday she had a celebration with the team at her Notting Hill headquarters, toasting the honor with Champagne and a cake with a Union Jack design.