The Dior Homme creative director was in town to present the label’s "autumn" collection. 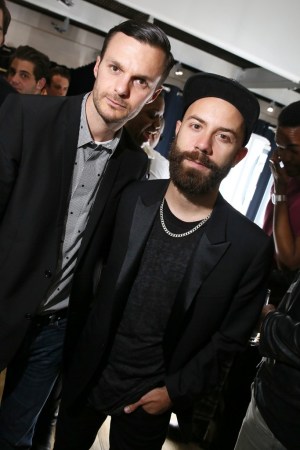 AROUND THE WORLD: Kris Van Assche has been racking up a lot of frequent flyer miles lately. Two weeks ago, the Dior Homme creative director was in Shanghai to present a repeat show of the label’s winter collection, and on Friday he was in New York to unveil the label’s “autumn” collection. For this occasion, the label transformed its SoHo store into an art installation designed by the Paris-based design duo Mathias Augustyniak and Michael Amzalag. Van Assche was only in New York for a brief period.

“I got here yesterday, and I’m going back tomorrow. Because, I mean, it’s a lot of fun going to Shanghai and having shows and doing installations here in New York, but I still need to do the collection,” he said. “That’s the problem. I mean, it’s always about presenting and explaining collections that are done, but it doesn’t mean that the next ones shouldn’t get finished. I’m always late anyway.”

The store event drew a number of New York personalities — former hockey player Sean Avery, Peter Brant Jr. and Stephanie LaCava. Van Assche himself invited French musician Yoann Lemoine, who also operates under the name Woodkid. The two collaborated on the fall 2011 collection, which Van Assche called “A Solider of My Own” and which was inspired by the musician’s work.

“We met a few times in Paris and he just was in New York, so it’s fun to have him arrive,” he said. Lemoine was at a dinner that followed at Acme that also drew Shala Monroque and artist Collier Schorr.

“I found out somehow my work as a musician and a director made sense with his work as a designer,” Lemoine said. “Because we have the same love for formalism and craft, and a sense of sobriety, too. We both, I think, are very rigorous in our work, and we do things seriously. We don’t joke about what we do.” Now Van Assche dresses him for some of his stage performances. The musician had just returned from the Coachella Valley Music and Arts Annual Festival, where he appeared in his own set and also played the role of creative director for Pharrell Williams’ performance. “It was a very busy festival for me,” he said.