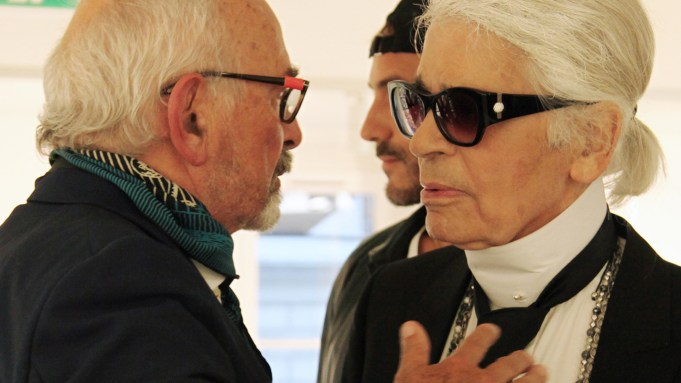 SNAP HAPPY: Despite many of his famous pictures being shot in the City of Light, Arthur Elgort had never held an exhibition in Paris – until now. As such, the opening of his “Fashion, Ballet, Jazz” retrospective at Colette on Wednesday evening drew quite a crowd of fashion types, including Karl Lagerfeld, keen to admire the fellow photographer’s work spanning the past 45 years and incorporating his early shots of dancers and musicians as well as his better-known candid fashion shots.

“I love his work, and I love the person,” said Lagerfeld after posing for photos with Pat Cleveland and Inès de la Fressange. “He lives in another world, he’s another kind of photographer. Mine is more related to fashion, it’s very different.”

De la Fressange, who features in one image in the exhibit, a shot taken in 1984 on the roof of the Paris Opera, reminisced: “He always asked us to dance when he was shooting.” It’s perhaps a remnant of one of Elgort’s first loves – taking pictures of ballet dancers.

“There are lots of photos in the exhibition that are the intermediary between photo-reportage and fashion photography, which at the time was ill-considered,” said de la Fressange. “Elgort showed that fashion photography could be artistic and timeless, which seems obvious today, but it really wasn’t at the time.”

Now in his seventies, Elgort, camera around his neck, continues to be an avid snapper, as he proved at the event, interrupting conversation when he visualized a great shot – of Colette creative director Sarah Andelman and her husband Philip.

“I still work the same way I did in the Seventies. Nothing has changed at all,” Elgort commented. Except now he regularly posts images on his Instagram account – the most recent a selfie taken at the event with photographer Steve Hiett.

What inspires Elgort? “When I see a pretty face,” he said. “It’s usually pretty faces.”

The exhibition runs through Nov. 5.