As If Sees Future in Creative Alliances

Jennifer Hudson photographed in an environment created by artist Ashley Longshore for the current issue of As If.

Glossy art and fashion magazine As If has launched The Collaboratory, a platform for limited editions, capsule collections and one-of-a-kind pieces created in partnership with the artists, actors and designers that fill its pages.

A shoe called the Pussy Power Pump, designed by Dee Ocleppo and embellished by artist Ashley Longshore, was created for Jennifer Hudson, the cover model of As If’s current issue, and is available for $400. 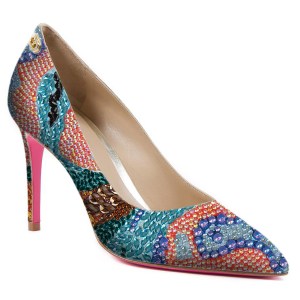 “Jennifer Hudson represents the quintessential American Dream, that if you have talent, and lots of it, you can really reach for the stars,” said Tatijana Shoan, As If’s editor in chief. “She’s a very positive person in spite of all the tragedy she’s gone through. What I love about Jennifer is she throws her shoes at singers she likes.

“Despite the art world not opening its doors to her, Ashley has continued with her passion,” said Shoan. “I took some of Ashley’s patterns and put them over a shoe and presented them to her.

“While the million-dollar paintings of major artists, whose work you love, are out of reach, you can now find collaborations with artists in major museums, boutiques and in our pages,” Shoan added.

Creative matchmakers who facilitate collaborations, Shoan and Fishkind, designed shoes inspired by British photographer Mick Rock’s iconic photos of David Bowie. They recently showed their designs to Rock at the Mercer Hotel, when the images caught the eye of Benicio del Toro, who was sitting at the next table.

“He saw these incredible shoes, and he knew Mick’s [work] and wanted Mick to shoot him,” Fishkind said, adding that the chance encounter led to a feature about del Toro with Rock’s images that will be published in the May issue. “We have four versions of the shoes in production. Signed by Mick, they’ll sell for $125.”

In another tie-in, set for later this year, and arranged by Fishkind and Shoan, Judith Leiber creative director Ocleppo will incorporate the work of artist Kenny Scharf, best known for his graffiti paintings, into evening bags.

“We started to realize that collaborations are here to stay,” said Fishkind. “It’s not just a trend, but represents what luxury really is about. We thought this is a unique area that we can own. We have relationships with artists, so why not do it for ourselves?”

“I’ve done a fair amount of work in theater, which is truly collaborative, where you’re working in the service of something larger,” Salle said. “I’m accustomed to that and I like that. I think it’s interesting. At a certain point your own ideas are just yourself rattling on inside your head. We’re alone in our studios most of the time.”

Salle, who studied under John Baldessari in the Seventies, said the late artist once told him, “‘You know, David, every artist should have a cheap line.’ Art can be as inaccessible as the market wants it to be, but why is that the only option? Art should be accessible.”