After appearing in several Swimsuits for All campaigns, Graham has launched a line of swimwear for the brand. 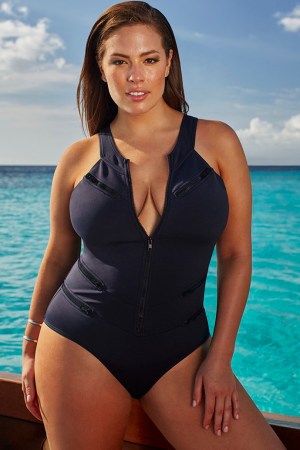 RIDING THE WAVE: Ashley Graham made history with Swimsuits for All in 2015 when she appeared in an ad for the brand that was featured in Sports Illustrated’s swimsuit issue. Graham became the first plus-size model to be showcased in the magazine.

Now, the model, who landed the cover of the magazine this year, is launching a swimwear line for the brand. The collection, which ranges from a one-piece halter style with lace-up details to a two-piece bikini adorned with Swarovski crystals, is available now and retails from $79 to $398.

Graham, who plays Joe Jonas’ love interest in DNCE’s music video for “Toothbrush,” has had a big couple of years. Along with appearing on the cover of Sports Illustrated and Glamour’s special issue with Lane Bryant, she inked a deal with Dressbarn on a capsule collection of dresses and introduced her Addition Elle lingerie collection in the U.S.

Previously, Graham, who also calls herself a body activist, told WWD she’s also interested in creating an active line for the plus-size market.

“Activewear is lacking in the plus division because I think people don’t think plus-size women work out,” said Graham, who has partnered with Net-a-porter on the Curvy Fit Club workout video.

Click through the slideshow to see every look from the swimwear collection.