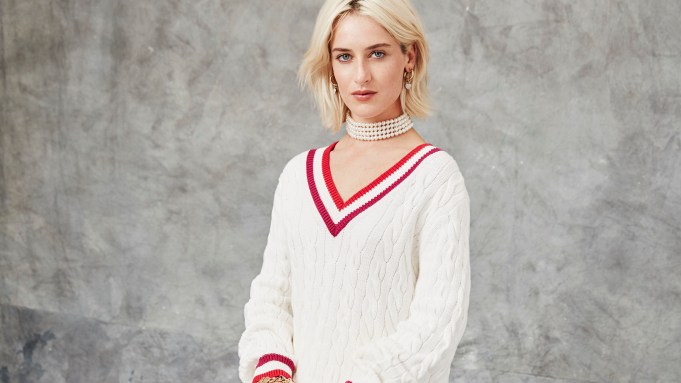 DIANA DAYS: Asos.com has teamed with Wah Nails founder Sharmadean Reid on a capsule collaboration that nods to Reid’s West London friends and to the late Princess Diana, when she was known as Lady Di.

The Princess Di inspiration stemmed from a book that Reid read while studying at Central Saint Martins. The tome included pictures of the late royal’s style, which led her to pen an article in WAH-zine called “Princess Di was Really Fly.”

It followed suit with Princess Di’s style — the royal was adventurous and playful — as seen in a red-and-white stripe varsity sweater paired with a pearl choker necklace or a little black dress with multi-pearl straps.

“I am actually from a fashion background, not a classic nail background,” said Reid. “I used to assist Nicola Formichetti and worked as a stylist and consultant. I love the Asos team and they’ve been trying to get me to do a collection for years, but I only wanted to collaborate when I had a good idea. I was never going to make a collection just for the sake of it. I wanted to do something cool. Now was the perfect timing.”

“The Wah aesthetic speaks directly to our 20-something customer and Sharmadean is the ultimate female creative, we are of course excited to collaborate with her,” said Asos design director Vanessa Spence. “With the majority of our collaborations we try and offer our customer something different from the brands usual product mix and this first clothing and accessory collection by Wah x Asos does just that.”

Reid, who launched Wah Nails in 2008, plans to set up a beauty experiential shop in London’s Soho next month.