If Ashley Greene has her way, the wardrobe she’ll wear to portray her vampire character, Alice Cullen, will be more demure than vampish. 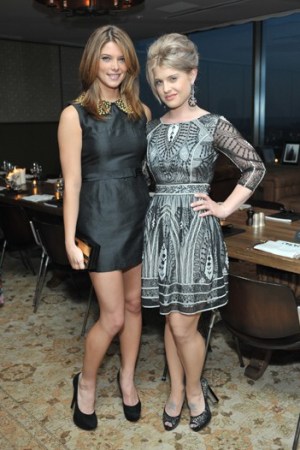 THE DEMURE VAMPIRE: If Ashley Greene has her way, the wardrobe she’ll wear to portray her vampire character in the last two films in the blockbuster “Twilight” franchise will be more demure than vampish. “I want her to have an Audrey Hepburn-Jackie-O mix,” Greene said of her character, Alice Cullen. “I’m a huge fan of the Jackie O Ray-Bans. I love ballet flats for her and leggings.” Fitting that ladylike image was the LBD with a studded Peter Pan collar that Greene donned at the dinner British e-tailer Asos hosted Monday at West Hollywood’s Soho House in honor of her recent cover shoot by Victor Demarchelier for ASOS magazine. With a circulation of 500,000, the magazine is one way Asos is growing its brand. Ten years after it was started in England, Asos is trying to expand its U.S. business with free shipping on returns and next month’s introduction of an edgy day-to-night line called Asos White. Hosting soirees such as the dinner attended by Hollywood progeny Kelly Osbourne and celebrity stylists Jen Rade and Jessica Paster also helped get the word out — and perhaps line up new cover girls. “I started wearing Asos before I got the cover,” Greene noted.

THE PAIN OF SPAIN: Rep. Howard Coble (R., N.C.), co-chair of the House Textile Caucus, criticized on the House floor on Tuesday the seeming extravagance of First Lady Michelle Obama’s trip to Spain. Coble, who hails from one of the poorest states in the country, took Obama to task for taking an expensive, four-day vacation to Spain with her daughter Sasha because taxpayers had to foot the bill for the Secret Service detail.

“I make infrequent appearances in the House, but today I feel obliged to express my disappointment of Mrs. Obama’s decision to conduct an elaborate vacation in Spain,” Coble said. “She and members of her entourage are spending lavishly, and American taxpayers will subsidize this vacation with lavish payments, as well.”

The First Lady, who paid for the trip for herself and her daughter out of her own pocket, according to her press secretary, stayed at the luxurious Villa Padierna, a five-star hotel with three 18-hole golf courses about five miles southeast of Marbella. The Tuscan-inspired villas are priced at upward of 2,200 euros, or $2,897, a night.

“With the dismal American economy in the tank, this Spanish vacation…was ill-conceived, ill-timed and generously laced with illogical arrogance,” Coble said. “It is my belief that the First Lady owes an apology to American taxpayers for this exercise in reckless spending.”

The First Lady’s office did not respond to a request for comment. Widespread criticism of Obama’s expensive trip, taken at a time of economic suffering at home, and featured on several networks and in news outlets, could have been deflected if the revelation reported in the Chicago Sun-Times on Monday had been provided by the White House from the outset. The Chicago Sun-Times’ Lynn Sweet reported the primary reason for the trip to Spain was to spend time with longtime Chicago friend Anita Blanchard — the obstetrician who delivered Malia and Sasha — because her father died this summer. The First Lady missed the funeral in July. Katie McCormick Lelyveld, press secretary to Michelle Obama, confirmed the accuracy of the report to WWD. In addition to Blanchard, the Sun-Times reported that Obama vacationed with another unnamed friend and, between the three women and four daughters, the group paid for their own hotel rooms and personal expenses. The First Lady’s entourage included six White House staffers and two East Wing staffers, Deputy Chief of Staff Melissa Winter and Obama’s personal assistant, Kristen Jarvis. Obama’s office said the Secret Service chose the Villa Padierna for security reasons.

BREATHE EASY: August is crunch time for designers putting the finishing touches on their spring 2011 collections (or in some cases starting them). So kudos to Tory Burch for mixing some philanthropy in with her patternmaking this month, creating a special T-shirt for the Lung Cancer Research Foundation’s annual Strides for Life race in Southampton this Sunday (Burch is a Strides for Life committee member and a longtime LCRF supporter). The first 500 women who sign up for the 3-mile run-walk event — which over the past five years has raised more than $2.1 million for the LCRF — will receive a free shirt emblazoned with the mantra “Run Breathe Live.”

SPREADING OUT: Comme des Garçons is broadening its Asian presence — through both retail and art. The Japanese house is planning to open a six-level flagship in Seoul on Aug. 27. The almost 19,000-square-foot store will house the brand’s second Six art-exhibition space — the first is located in Osaka, Japan. Both Six locations will host a new exhibition of short films and artworks by David Lynch entitled “Darkened Room.” The show started Saturday in Osaka and runs through Oct. 9 before moving to Seoul. Meanwhile, CDG is preparing to open a store in Beijing come October.

WOMAN’S DAY: A power troika of Donna Karan, Arianna Huffington and Sarah Brown, wife of the former British Prime Minister Gordon Brown, will host the first annual Women: Inspiration & Enterprise symposium in New York on Sept. 20. Coinciding with the Clinton Global Initiative and the convening of the U.N. General Assembly, the one-day event will feature a roster of speakers addressing issues of importance to women, including childbirth deaths and female technology entrepreneurs. The program also includes a fashion show spearheaded by Karan, who is inviting other designers to participate, as well as a cocktail party on the roof of Skylight West featuring a concert by Estelle. Among the confirmed speakers are Wendi Murdoch and model and activist Liya Kebede. Ticket proceeds benefit the White Ribbon Alliance for Safe Motherhood and Karan’s Urban Zen Foundation.