For the second time at the G7, FLOTUS showed her appreciation for Raf Simons wearing a dress from one of his collections for Calvin Klein. 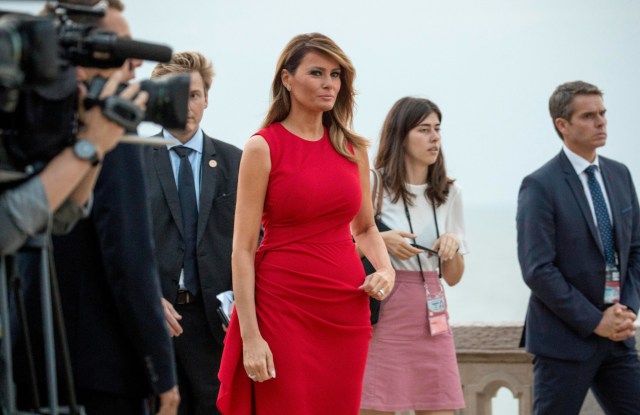 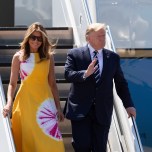 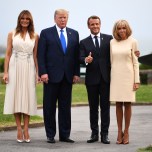 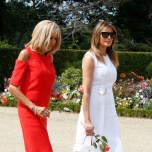 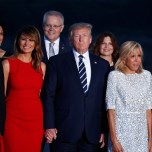 WORDS LESS SPOKEN: After hours of intense discussions and debate, the G7 heads of state presented a united front Sunday night in Biarritz, France. World powers from France, Germany, the U.S., Italy, Canada, the U.K. and Japan returned to the Hotel du Palais for the summit’s extended partners program.

The more communal gathering may have been a balm after a full day at the Centre de Congres. President Trump started the day with a working breakfast with British Prime Minister Boris Johnson before the seven leaders hashed out the global economy, foreign policy and security affairs. Later in the day they planned to delve into inequality and the partnership for Africa. Trump’s schedule included bilateral talks with Japan’s Prime Minister Shinzo Abe and Canadian Prime Minister Justin Trudeau, and a tête-à-tête with Australia’s Prime Minister Scott Morrison.

While Trump is known to be a teetotaler, his socially imbibing counterparts may have been in need of some Bordeaux wine. First Lady Melania Trump dressed for the evening’s festivities in a red Alexander McQueen dress designed by Sarah Burton. Tea leaf readers may interpret the choice of a British label as a kindred gesture to the U.K. or the striking color to the one in Japan’s flag. But FLOTUS’ stylist Hervé Pierre is not one to send secret messages. Quietly tenacious in his approach, he continually scouts out stores looking for potential event-appropriate attire for the first lady. All of her wardrobe choices are presented, discussed at length and then she makes the final call.

Earlier in the day for a tour of the nearby village Esplette, she raised the flag so to speak for Calvin Klein’s former designer Raf Simons, wearing a white sleeveless dress with a long belt from one of his collections two seasons ago. Like the Duchess of Cambridge, FLOTUS isn’t opposed to wearing designer labels from seasons past. Trump also wore a tried-and-true Chanel jacket for Friday’s departure on Air Force One and a Simons-era Calvin Klein dress — bright yellow, white and hot pink — Saturday in Biarritz.

Red and white were also the colors of choice Sunday for France’s stylish u Brigitte Macron where members of the female squad — Japan’s Ake Abe and World Bank president David Malpasse’s wife Adele, among others — visited a garden in the town laden with traditional Labourd houses. They also caught a traditional musical performance at the 16th-century church Saint-Etienne.

One noticeably missing party in the G7 group photo was Johnson’s partner Carrie Symonds, who stayed in the U.K. reportedly due to work commitments. She was in the news last week after being denied entry to the U.S. that was reportedly due to a trip that she had taken to Somaliland. The other spouses of the G7 carried on, as it were, smiling and chatting in footage of Sunday night’s gathering.

A designer in his own right, the French-born American citizen Pierre was in France earlier this summer to show his label Atelier Caito for Herve Pierre. He and his partner Nicolas Caito landed several new accounts, including U.S. ones. But fitting Pierre’s dresses would be for the first lady, he doesn’t play that card. As his alliance indicates, action speaks louder than words.