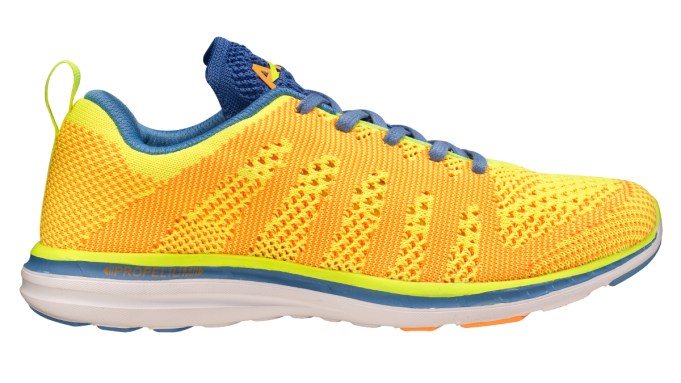 Athletic Propulsion Labs, a footwear brand known for its technological innovations and fashion-forward style, is expanding its presence in Asia.

Lane Crawford has just picked up APL’s exclusive distribution rights for the Hong Kong and China markets. Pedder Group, which is part of The Lane Crawford Joyce Group, is selling the brand’s shoes in Singapore. Meanwhile, Fast Retailing‘s Theory is about to start selling APL kicks at its doors in Japan.

Twin brothers and former University of Southern California athletes Adam and Ryan Goldston cofounded the company in 2009 and went on to develop an 8-spring “Load ‘N Launch Technology” for a shoe that was banned by the National Basketball Association. Since then, they have rolled out shoes with performance-enhancing features in a range of different colors and materials, including a lightweight woven mesh.

Ryan Goldston declined to give a sales figure for the company but said it is generating a volume in the “multimillions” and seeing “exponential” growth. “We at least doubled, if not tripled revenue” in the last year, he said.

The twins, who were in Hong Kong last week to promote the brand with Lane Crawford, said the brand is also eyeing expansion to other Asian markets, including South Korea. Theory might pick up the brand for its Korean stores, Ryan Goldston said, adding that Japan and South Korea are significant markets for the brand’s own online sales.

As Asia becomes an increasingly important part of APL’s business, the region is also influencing the brand’s product design. Adam Goldston said he enjoyed seeing a woman in Hong Kong wear a pair of APL men’s high-top sneakers with a fringed mini-skirt at the Lane Crawford event. And he noted that Asian consumers are bold when it comes to color.

“In Asia, I feel like the customers are more willing to take a chance with the product that they are wearing,” he said.

“This market definitely influenced a lot of the stuff that we’ve done, and obviously what we’ll do going forward,” he said.

Creatures of the Wind and APL collaborated on a footwear capsule collection last year.