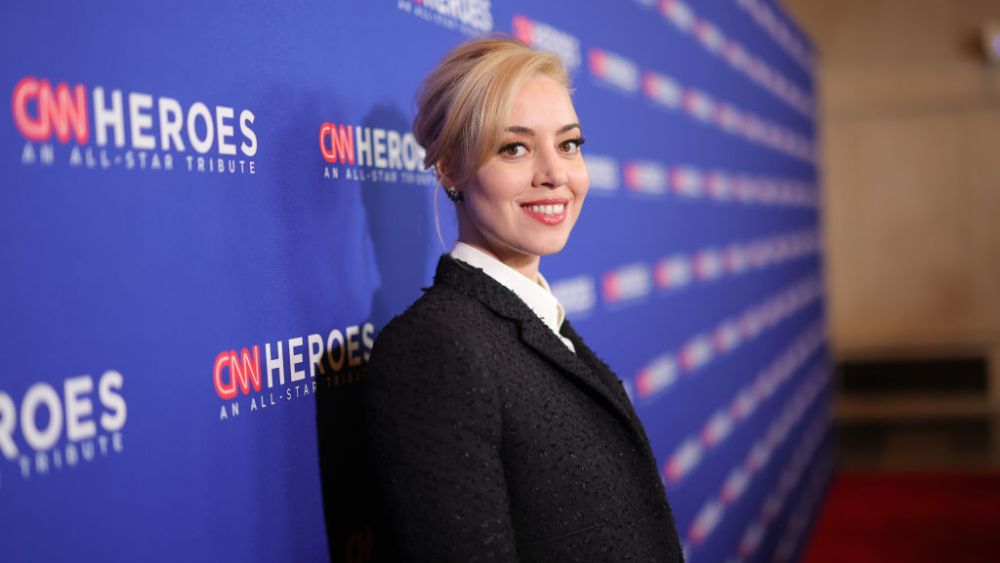 Aubrey Plaza attended the 2022 CNN Heroes: An All-Star Tribute on Sunday in New York City in a prep school-inspired look. For the award ceremony, Plaza wore a Thom Browne jacket and skirt.

Plaza’s black jacket was speckled-textured and her matching mini skirt had a crisscross-like pattern. Underneath her Thom Browne ensemble, she wore a white blouse with parallel sheer paneling near the buttons. To complete her look, Plaza wore a pair of black opaque stockings.

The actress was styled by Jessica Paster for her award ceremony look. Paster has also outfitted Emily Blunt, Ashley Benson and Rhea Seehorn.

For accessories, Plaza wore midi rings and a pair of stud statement earrings. When it came to shoes, she wore a pair of shiny black loafers with a short heel.

She embraced an award-ready makeup look, with rosy pink blush, a pink lip and black mascara. Her hair was pulled back into a mid-high bun with a side-swept bang and pieces framing her face.

Plaza was a presenter at the star-studded award ceremony, which included Adam Scott, Naomi Campbell, Anderson Cooper and Kristin Davis.

Plaza stars in the Emmy-award winning HBO series “The White Lotus,” which just wrapped up its second season with a jarring finale. The series also stars Theo James, Jennifer Coolidge and Meghann Fahy.

The CNN Heroes is a syndicated TV special that celebrates those who make significant contributions to humanitarian aid and a notable difference in their communities. This year’s award ceremony, hosted by Anderson Cooper and Kelly Ripa, honored 10 individuals with $10,000 each to continue their philanthropic work.