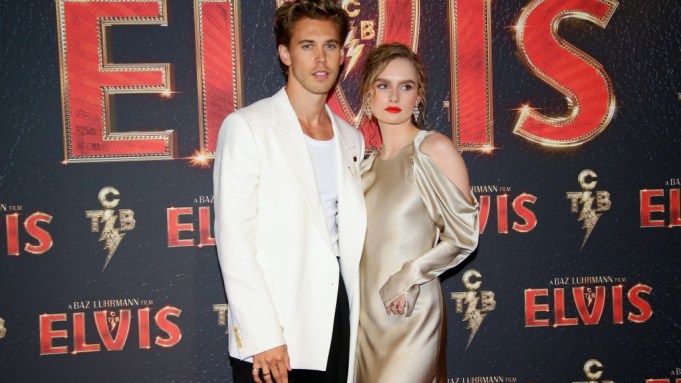 The cast of “Elvis” has touched down in London.

Austin Butler and Olivia DeJonge led the way on the red carpet at the premiere of the anticipated biopic at the BFI Southbank on Tuesday, wearing designs by Alexander McQueen and Jonathan Simkhai, respectively.

Butler, who plays the titular role of Elvis Presley in the film, wore an ivory, wool twill, asymmetric, double-breasted jacket with black wool gabardine pleat trousers, all by Alexander McQueen. He was styled by Tom Eerebout and Sandra Amador, both of whom also work with Lady Gaga.

DeJonge, who plays Presley’s wife Priscilla Presley, looked to Jonathan Simkhai for her look, wearing a silk champagne gown featuring an open-back design and jewel detailing. She wore her hair in an updo, and donned jewelry by Bulgari. She was styled by Chloe Hartstein, who also works with stars, including Amy Schumer.

Other cast members present for the premiere include Hanks, who wore a simple gray suit with a black button-down, Yola, who wore a dramatic red dress with ruffled detailing, and Luke Bracey, who wore a green-and-blue plaid suit.

The director, Baz Luhrmann, the filmmaker behind movies like “Moulin Rouge” and “The Great Gatsby,” was also at the premiere with his wife Catherine Martin and their daughter, Lillian Luhrmann.

“Elvis” depicts the life and career of the famed late singer Elvis Presley, from his upbringing in Mississippi and Tennessee to his rise to stardom as a singer and movie star, as well as his complex relationship with Parker.

The film first premiered at the Cannes Film Festival on May 25.

Miuccia Prada and Baz Luhrmann Are at It Again for ‘Elvis’