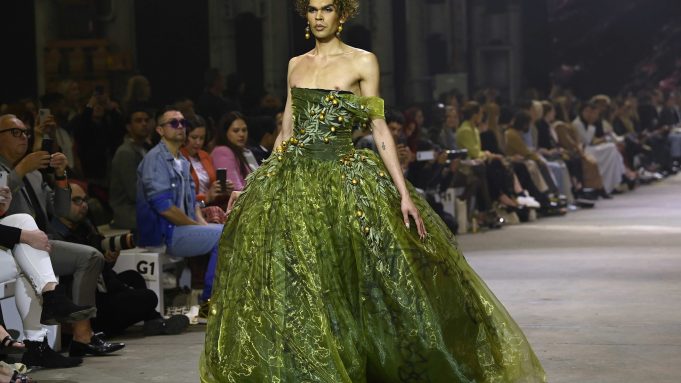 Announced at a ceremony in the Northern Territory capital of Darwin on Tuesday evening Australian time, on the eve of the Darwin Aboriginal Art Fair, McCann won the award for his Gumnut Gown, which first appeared in the First Nations Fashion and Design showcase at Afterpay Australian Fashion Week in June.

Melbourne-based McCann, a Marrithiyel man who studied fashion design at Darwin’s Charles Darwin University — and whose day job is senior Indigenous arts officer with Victorian not-for-profit organization The Torch, providing art and cultural support to Indigenous inmates across the state — spent six weeks creating the ballgown in his spare time, using 21 meters of fabric, including 12 meters of hand-painted iridescent green gold vintage organza, embellished with more than 70 hand-painted gumnuts — the woody fruit of the eucalyptus tree.

Inspired by his grandmother Elizabeth’s home-sewn 1950s wardrobe, the dress was also a nod to Norman Hartnell’s famous Wattle gown, embroidered with sprays of Australia’s national flower, the golden wattle, which Hartnell made for Queen Elizabeth II to wear at a state banquet in Sydney in 1954, during her first visit to Australia.

Originally commissioned, but ultimately declined, by Sydney’s Powerhouse Museum for its Eucalyptusdom exhibition, which runs until May 2022, the Gumnut Gown has just been purchased by the National Gallery of Victoria according to McCann.

“I’m just really honored and blown away that the dress is continuing to be appreciated in different platforms,” said McCann.

Also Melbourne-based, Denni Francisco won the Fashion Design category for her Ngali label, which also appeared at AAFW as part of the event’s second Indigenous fashion showcase that was presented by DAAF’s Indigenous Fashion Projects initiative.

Eunice Napanangka Jack from Ikuntji Arts won the Textile Design category, while the Community Collaboration Award was given to Anindilyakwa Arts with Aly de Groot and Anna Reynolds.

The Special Recognition Award, which honors exceptional contribution to the development of Aboriginal and Torres Strait Islander textiles and fashion, went to Bima Wear, a women’s creative enterprise and fashion label that was established in 1969.