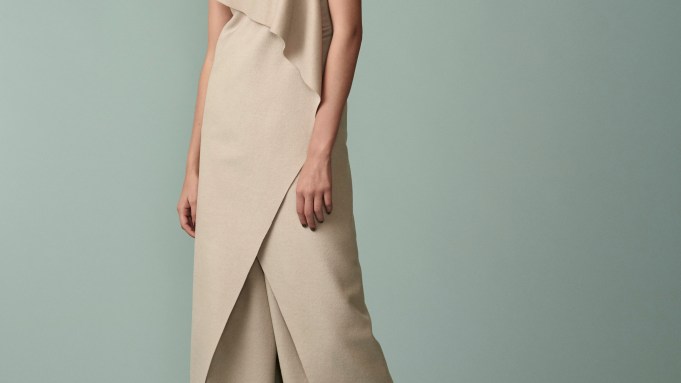 AUSSIE STYLE: Tome, Bianca Spender, Romance Was Born, Peter Strateas and Mario-Luca Carlucci were among the labels to present in Paris during a cocktail on Saturday night for the second edition of the Australian Designers Abroad initiative, held by the Australian Fashion Chamber.

Sydney-based Spender, who won the 2015-16 International Woolmark Prize Australia regional final, had just returned from New York, where she was competing in the prize’s last round.

“It’s an incredible time because I have working in Australia for 12 years in an Australian context. And in the last two weeks, I presented in New York and in Paris, which is a second home, having lived here for three years,” said the designer, who had worked for Martine Sitbon in the City of Light.

Spender presented her collection inspired by the “1940s feminine-masculine women.” “They were strong and powerful,” the designer said. “She was wearing a male suit with a soft tie or a long dress. They weren’t about being androgynous, but it was really a play between the two — [men’s and women’s wardrobes].”

“It’s important to be in Paris; we see half of our buyers here,” said Tome’s cofounder Ryan Lobo, who presented the label’s fall collection that was shown during New York Fashion Week last month. “September this year will make our five years. We’re looking at new markets and expanding the markets we’re already in.”

“At least 50 percent of our business is in New York,” he continued. “We have stores in Russia and the Middle East, but we don’t have any store in Europe. London will be important for us and hopefully Paris.”

For its part, Romance Was Born is to have its second trunk show with Moda Operandi.

“The collection is based on the life of Liberace. The whole idea is about disguise, performance, hidden identity,” said Anna Plunkett, one half of the brand’s design duo.

“I saw the Romance Was Born show at Sydney Fashion Week in April. They’re like the John Galliano of Australian fashion — totally over the top. A crazy performance,” said Justin O’Shea, buying director of Mytheresa.com. “The commercial aspect is something that they need to find, but the creativity — those guys have everything.”

“I also just bought a new brand, called P.E, which we’ll launch exclusively online. It’s a new cool sportswear collection from a cool Australian chick, Pip Edwards. It’s an Australian version of Yeezy,” he said. “We also launched last season Ten Pieces, also super sporty, which I feel is a great direction for Australian fashion. The evolution of modern sportswear-leisurewear brands could be a huge potential for the Australian market.”

Christopher Esber, Ginger & Smart and Rebecca Vallance are the other labels presenting in the Hip art gallery at 8 Rue Saint-Roch through March 9.