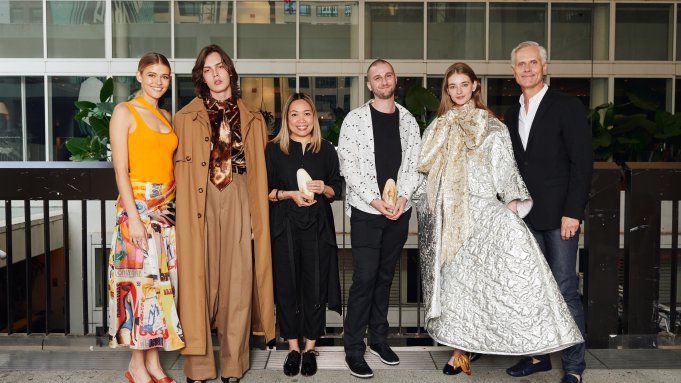 Announced at a function at The Ivy Sunroom in Sydney on Tuesday, the designers, who are graduates of RMIT University and the University of Technology Sydney respectively, will each be awarded $20,000 and assistance in securing a six-month internship at a U.S.-based fashion company with a global focus.

According to Carfrae, the judges were struck by the “wildly talented” 25-year-old Roylance, with Clark’s dexterity also impressing.

“She had men’s wear, women’s wear and accessories all as part of her graduating collection, which is really unusual,” he said. “The tailoring, the trenchcoats, the prints, were all just superb.”

At 50, Clark is the oldest graduate to have been awarded a scholarship through the foundation. Born in Vietnam during the war and originally working in marketing at Saigon’s Park Hyatt and other five-star hotels, Clark moved to Australia after marrying an Australian. After raising a family, she decided to pursue her dream of studying fashion, recently completing a masters at RMIT.

“To come from nowhere and to have an opportunity like this, it’s just amazing,” she said.

He added, “We just want to keep going, we want to keep the momentum going so that we can really help as many as we can. Because I don’t think anyone else is really helping support young fashion graduates.”