A few of Austria’s up-and-coming fashion designers, including two Jil Sander alums, got a chance to showcase their talent for a Japanese audience. 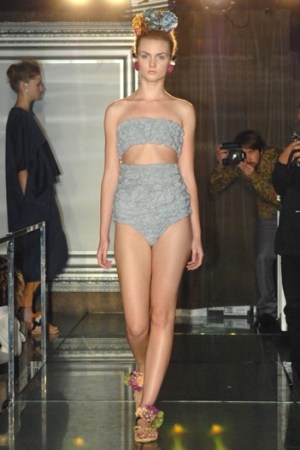 AUSTRIANS IN TOKYO: Earlier this week, a few of Austria’s up-and-coming fashion designers got a chance to showcase their talent for a Japanese audience. Spot On Wien, an initiative sponsored by the Vienna Tourist board and other Austrian organizations and companies, staged a fashion show at the club Velours in Aoyama to coincide with Tokyo Designers Week. Ali Zedtwitz and Valerie Lange, both alums of Jil Sander and former students of Raf Simons, debuted the avant-garde stylings of their new label, Diptych. Zedtwitz also showed off some sculptured, edgy looks from her own namesake brand. Klaus Mühlbauer, the fourth generation of a milliner family, took advantage of the evening to unveil his playful, feminine headgear for women and his short-brimmed creations for men. The designer has already snagged custom orders from celebrities like Brad Pitt and George Clooney.

ANTHROPOLOGIE’S NEW TIE-UP: Anthropologie is on a roll with the young designer partnerships. On the heels of a collection with Ruffian’s Brian Wolk and Claude Morais, the company is set to debut a collaboration with L.A.-based designer Koi Suwannagate later this month. Named Lawan after the Thai word for “beautiful,” the four-style lineup is Suwannagate’s first stab at a secondary collection. “We had so many requests for pieces with a more affordable price point,” explained Suwannagate. “But we make everything in-house and it would have been too expensive for us. Working with Anthropologie was a natural fit.” The Lawan collection, which retails from $228 to $298, will feature a gown, two cardigans and a sleeveless top, all cut from wool blends and embellished with the designer’s signature frothy, hand-sculpted appliqués. “Each of them represents my past bestsellers,” said Suwannagate, adding the collaboration will be an ongoing one.

TOD’S IN THE SHADE: Tod’s is about to fill one more gap in its lifestyle offerings. Just in time for cruise and Christmas shopping, the luxury goods brand will roll out a few styles of its new eyewear line to select Tod’s flagships and opticians worldwide. The full range will debut in February. The capsule is comprised of 13 models for men and women, plus unisex ones, in acetate and metal, or combinations of the two. Colors include black, bronze, gold, silver and blush pink. Some styles are available in different sizes. The designs already have attracted fans such as Jessica Alba, Freida Pinto, Jennifer Garner and Demi Moore. Retail prices for the Marcolin-produced eyewear range from $289 to $541.

OUT THERE: Dysfashional, the conceptual fashion exhibition curated by Luca Marchetti and Emanuele Quinz, is set to present two new stages in Paris and Berlin. The avant-garde show, which does not feature any clothing, will include a video installation by Raf Simons and experimental exhibits by the likes of Maison Martin Margiela, Kostas Murkudis, Pierre Hardy and Damien Blottière. Up-and-coming Berlin-based designer Michael Sontag has conceived an interactive installation inspired by the dressing table. Parasite, a hybrid gallery-cum-store space that will feature a labyrinth of “wallscapes” designed by Bless, will showcase work by emerging artists and designers exploring the boundaries of contemporary fashion.

A Dysfashional fanzine was released for the Paris leg of the show, scheduled to run at the Passage du Désir until Nov. 29, with a German edition to follow for the Berlin session, to be housed in the city’s Haus der Kulturen der Welt venue from June 18 to July 18. Both editions will then be bound to form a catalogue.

HER TURN: Damir Doma, a rising talent on the Paris men’s wear scene, is turning his hand to women’s wear, too. The Croatian designer plans to show his debut women’s collection on the runway during Paris Fashion Week next March. Earlier this year, Doma opened a boutique in Paris on the Rue des Arquebusier in the Marais.