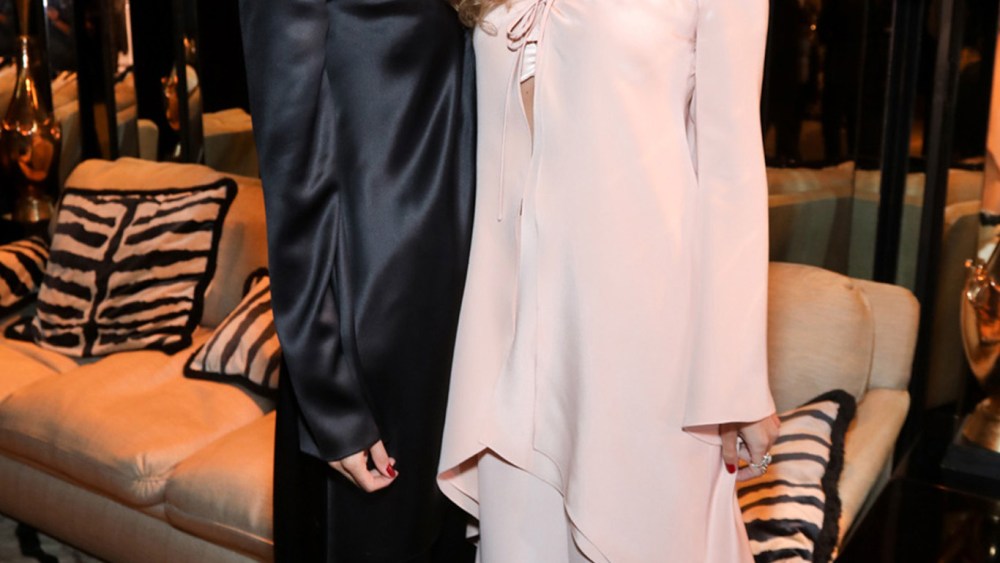 AZZARO RISING: Loris Azzaro began celebrations of its 50th anniversary with the presentation on Wednesday of a capsule collection designed by socialites Bianca Brandolini and Eugenie Niarchos.

Gabriel de Linage, chief executive officer of the Paris-based fashion house, said it was the first of five key events scheduled throughout the year, ahead of the planned relaunch of its women’s ready-to-wear collection in 2018.

In March, it plans to open its first men’s store in France in the Saint-Germain-des-Prés district of Paris. This will be followed by a retrospective at an undisclosed location in May, to be accompanied by a book published by Editions de la Martinière.

The house is set to reveal soon a successor for Arnaud Maillard and Alvaro Castejón, its former artistic directors who exited their roles in June after a three-year stint. In addition, it plans to launch a men’s capsule collection in the fourth quarter.

“We are trying to develop men’s and women’s in parallel. They are both very strong segments: men in particular thanks to the perfume, which is very well-known, and women’s fashion thanks to couture, which is at the heart of Azzaro,” de Linage told WWD.

“We plan to reunite men’s and women’s with a new women’s ready-to-wear line that will be launched in 2018,” the former L’Oréal executive added.

Models paraded 26 looks adapted from archival designs on two sets decked out with vintage lamps and furniture meant to evoke the heyday of the brand in the Seventies, when Azzaro dressed celebrities like Marisa Berenson, Sophia Loren and Raquel Welch.

The looks included fringed jersey dresses with beading around the neckline and cutout dresses with a heart-shaped bodice. Around 15 belonged to a so-called “couture-à-porter” line that will go on sale in May, according to de Linage.

Brandolini grew up with Valentino (her mother Georgina worked by the designer’s side for two decades) but confessed to feeling nervous about showing him her designs. “I feel very honored, of course, and a bit stressed also, because Valentino is such an icon,” she said.

Dundas, a free agent since parting ways with Roberto Cavalli in October, had nothing but praise for the pair. “I think they did a really great job. They both have an extraordinary taste and this is a reflection of that. I’m very proud of them,” he declared.