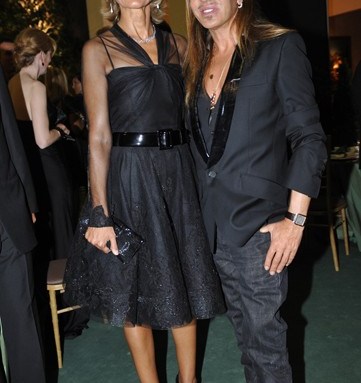 SITTING PRETTY: Azzedine Alaïa was practically speechless in Paris on Tuesday night, agog after viewing the Art Deco furniture on display at Vallois as the Biennale des Antiquaires kicked off with a gala under the Grand Palais’ soaring dome. “Quelle beauté,” he sighed.

John Galliano, meanwhile, caused blood pressures to rise when he got a little too close to an earthenware figurine from the Tang dynasty at the Galerie Christian Deydier stand. “They were taking a picture and I leaned on that [plinth] and everyone was like, ‘Ahhh!’” the couturier related as he was tugged toward the table of honor, around which sat Bernard and Helene Arnault, Maryvonne Pinault, Rachida Dati and Bernadette Chirac.

Fashion folk were clogged at the stands for fine jewelry, some to catch a glimpse of Monica Bellucci at Cartier. When a reporter started asking Anna Mouglalis about her new short haircut, Chanel’s public relations team went into overdrive, diverting attention a few inches below: a necklace blinking with more than 2,000 diamonds, priced at 1.8 million euros, or about $2.5 million.

IRINA’S BREAK: A Leighton Meester front-row sighting isn’t exactly an anomaly. But one of the most sought-after models sitting courtside? Less common. At the 3.1 Phillip Lim show Wednesday afternoon, as the likes of Meester, Emmy Rossum, Elizabeth Banks, Paula Patton, Joy Bryant and Juliette Lewis struck their best camera poses, veteran mannequin Irina Lazareanu was happy to sit back and take it all in.

“After six seasons I wanted to take off some time,” explained the model, who is using her breathing room to continue work on her nascent album with Sean Lennon, two years in the making. “I always put all my eggs in one basket…and for the last three years I’ve had no break. Phillip is a dear friend of mine, so I had to come see his show.” And, while one might expect Lazareanu to feel some pangs watching her colleagues strutting their stuff, it’s quite the contrary. “This is the first time I’ve really enjoyed New York Fashion Week,” she admitted. “I can have lunch with friends and see people.” Lazareanu fans fear not: The model will be walking “a little” in both Milan and Paris.

ART BAG: To mark Vanity Fair’s Campaign New York, Lambertson Truex teamed up with artist Donald Baechler to create a limited edition tote. The bag features a print that is the background of one of Baechler’s paintings. The bags, which are in a limited edition run of 200, cost $1,000, and 15 percent will be donated to the Whitney Museum’s photography program and collection. Social Olivia Palermo got her hands on one and sported it at the Ports 1961 show earlier this week, but everyone else will have to wait to grab one at tonight’s party at Lambertson Truex’s Madison Avenue store.

L.C. MANIA: “The Hills” star Lauren Conrad can certainly attract a crowd. At a personal appearance at Bloomingdale’s New York flagship on Wednesday evening, a crowd of nearly 500 screaming fans gathered on the second floor to catch a glimpse of the reality star. “It’s the best-selling celebrity line we’ve ever had,” said Frank Doroff, vice chairman of the store. “The sell-throughs have been fantastic. We can’t keep it in stock.”

Meanwhile, Conrad’s fans were in full form. “I think I might have a seizure when I meet her,” one teen told her friend.

“Oh my god, there’s so many people here,” Conrad said, coming off of the elevator as fans on line for autographs snapped pictures of her with their cell phones.

MAD FOR NANETTE: John Slattery, who played Mayor Victor Lang on “Desperate Housewives” and was married on the show to Gabrielle (Eva Longoria Parker) before being killed off by a tornado, was seated with his real-life wife, Talia Balsam, at Nanette Lepore’s fashion show Wednesday. This was Slattery’s first and only show of the week. “Nanette is a good friend of ours. Our kids go to school together,” said Slattery, who currently appears in “Mad Men” playing the husband of his real-life wife and was just nominated for an Emmy for best supporting actor.

LA DOLCE GUCCI: To kindle the brand’s creativity with a more global perspective, Gucci is relocating its 50-strong design team from Florence to Rome. As the Eternal City is also her hometown, creative director Frida Giannini clearly welcomes the company’s decision, and from next spring she’ll be based in an historical palazzo in the Castel Sant’Angelo neighborhood.

FRENCH SIGHTING: Renaud Dutreil, the newly minted chairman of LVMH Inc., has been making the fashion rounds as the company’s new eyes and ears in New York. He has been meeting designers and, on Wednesday, was spotted taking in the Marchesa presentation.

FASHION PUZZLE: Accessories maven Anya Hindmarch is never one to shy away from her quirky British sense of humor — as proven by her signature scalloped cosmetics bags emblazoned with words like “pills” — and now she’s adding some well-needed levity to New York Fashion Week. At the brand’s press preview on Wednesday, the designer offered editors a custom book dubbed “Anya Hindmarch’s Little Book of Fashion Week Puzzles.” The pamphlet is filled with fashion-tweaked games such as word jumble, Mad Libs and even a crossword puzzle with hints such as “Graydon Carter’s firstborn,” “editor host of Stylista” and a three-letter word for “our favorite fashion trade publication.” “We’ve all become obsessed with crosswords. We get quite competitive,” said Hindmarch. “There’s so much time-wasting at shows that I thought it might be a fun little thing.”

POWER OF THE PEN: Susan Sarandon was on the receiving end of the Montblanc de la Culture Arts Award Tuesday during a private luncheon at New York’s Angel Orensanz Foundation. On hand to celebrate the actress was tapping-extraordinaire Savion Glover as well as emcee of the hour Whoopi Goldberg. “Was that it?” Goldberg asked Glover as he wrapped up his first of two tapping sets. “I wish when people p–s me off I could just tap on the floor,” she said. The Whoopster is said to be a huge Montblanc devotee and regularly shops the SoHo store for pens and wallets. “I like Montblanc pens because the written word is going away,” Goldberg said. “Now people text or type, but pens give me some flow.” After a video dedication from past recipients and some kind words by Montblanc North America president and chief executive officer Jan Patrick Schmitz, a final guitar performance by Sarandon’s son Miles Robbins wrapped up the event, bringing a tear to the actress’ eye. “The arts are what fosters our imagination and helps make it stronger,” Sarandon said.

HIS & HERS: Azzaro plans to introduce a small men’s collection in Paris in January Vanessa Seward, the Paris house’s designer, said she asked her husband, French musician Bertrand Burgalat, to design a capsule collection based on clothing he loves but can’t readily find. She said it would include four complete tailored looks, with accessories. Seward said she hopes to enlist other stylish men to moonlight in the future. Seward already has the likes of social Eugenie Niarchos and Jemima Khan guest designing women’s collections. Some of Khan’s creations for Azzaro will be unveiled in London during that city’s fashion week.

V DAY: Diana Vreeland fever is about to hit Europe. Jean-Paul Gaultier already has booked his ticket for Claire Nadeau’s critically acclaimed stage portrayal of the iconic American fashion editor in “La Divine Miss V,” due to open at Paris’ Rond Point theater on Sept. 17. Directed by Jean-Paul Muel, the show is an adaptation of Mark Hampton and Mary Louise Wilson’s play, “Full Gallop,” based on Vreeland’s memoirs. Meanwhile, Milan Fashion Week will see the opening of Luna magazine’s exhibition “Vreelandesque,” held at Villa Necchi Campiglio. The event will run Sept. 24 to 26.

GREECE LIGHTNING: Grab your designer togas: Greece is out to grab some of the show season’s limelight. Marios Schwab; Filip Arickx and An Vandevorst of A.F. Vandevorst, and Juun.J figure among 42 designers down to show at the eighth Hellenic Fashion Week in Athens. Schwab and the A.F. Vandevorst duo will be restaging the spring collections they’re showing in London and Paris, respectively. Jean Charles de Castelbajac will be guest of honor at the event, scheduled to run Oct. 9 to 12 at Technopolis, Gazi, which also will host an exhibition of the designer’s work.