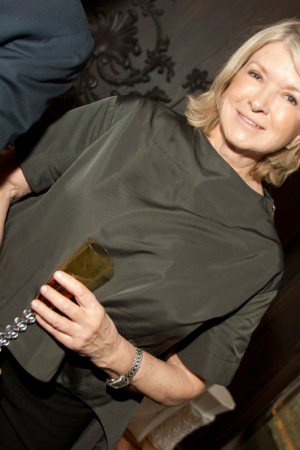 On Tuesday night, the newly opened — and much delayed — Baccarat Hotel & Residences, located just across the street from the Museum of Modern Art, had its official grand opening at last. The hotel — the first from the French crystal brand — is a 50-story tower that boasts 114 rooms, a La Mer spa and a signature restaurant, Chevalier. The space’s main bar, just a few stairs up from the main lobby, finds décor inspiration from Versailles — all mirrors, chandeliers and baroque furniture, punctuated by a plethora of pricey art prettifying the walls.

Marie Antoinette herself would not have been out of place at the opening party, which imitated the excess of Versailles in its heyday. Guests including Martha Stewart, Ann Dexter-Jones, John Demsey and Fern Mallis traipsed through the multiroom main salon, where waitresses proffered flutes of Champagne — served in Baccarat crystal, of course. “This is heavy,” noted one partygoer picking up one of the weighty glasses. Luckily, there was plenty of seating to go around if one felt overexerted, including a crowded outside patio that provided views of the Midtown East skyline.

Plates of lobster risotto, smoked salmon cream puffs, spring pea soufflé and seared pork belly circulated the room, but a lavish caviar display complete with a flight of toppings proved to be the crowd favorite. Stewart, posted up near the fish eggs, deemed the party a success. “Attention, good staffing, catering to a customer’s needs and wants,” the domestic goddess said of what makes a good hotel. “And this looks like it is doing all of it.”