Maxime Simoens, Elie Top and Jean-Claude Jitrois and were among guests at a launch party. 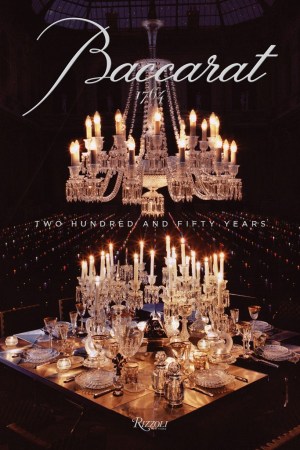 CRYSTAL GALE: “I love Baccarat’s universe,” Maxime Simoens enthused at a cocktail to mark the launch of the book “Baccarat: Two Hundred and Fifty Years” at the Maison Baccarat in Paris. “I have a chandelier, candelabras and vases at home. I like the classic pieces,” added the designer, who is working on a pre-collection he will show in New York in January.

Design aficionado Murray Moss and French journalist Laurence Benaïm, the book’s co-authors, greeted guests along with Baccarat chief executive Daniela Riccardi. The Rizzoli is already out in English and French, with Japanese and Chinese versions on tap.

Benaïm said she learned a lot by writing on the subject, especially about the special commissions: “Tsar Nicholas II and Maharajahs would come to Rue de Paradis in Paris [where crystal ware makers were at the time] for special orders of majestic candelabras and lusters.”

Crystal artisans in the north of France, or “fire masters” as Benaïm called them, keep the exclusive know-how alive. “I have the same fascination when I visit couture workshops,” said the editor-in-chief of Stiletto magazine, who also recently penned a book on Azzedine Alaïa.

Jewelry designer Betony Vernon, whose book “The Boudoir Bible – The Uninhibited Sex Guide for Today,” has recently been published in France, rattled off how to set a scene for seduction: “You need crystal in a boudoir: beautiful glass sets, lighting, etc.!” The high priestess of eroticism is developing a concept for a TV show for U.S. television around the boudoir.