Isaac Mizrahi Takes On ‘Peter & the Wolf’ at the Guggenheim

In his seventh year narrating the holiday run of the classic children’s story, Mizrahi has also signed up as director, costume designer and set designer. 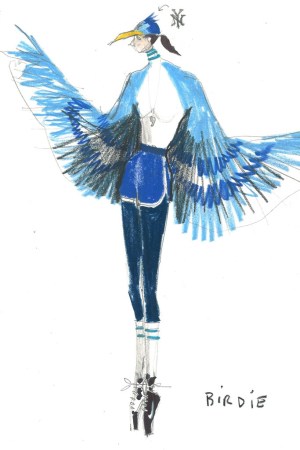 BAD WOLF: In his seventh year narrating the limited holiday run of “Peter & the Wolf” at the Guggenheim Museum, Isaac Mizrahi has also signed up as director, costume designer and set designer. The Works & Process event reimagines Sergei Prokofiev’s classic children’s story with conductor George Manahan and choreographer John Heginbotham. While a reading of the tale by Elaine Stritch years ago in Bridgehampton and another by David Bowie are among Mizrahi’s favorites, he wanted this year’s version to be his own. As for why he decided to dive in this year, Mizrahi said the idea had been “nagging” him for a while. “Sometimes when you have a vision, it’s more work to fight the darn thing than it is to realize it.”

Set in Central Park in midwinter in modern day, “Peter & the Wolf” called for six costumes including Birdie, who actually has wings. “I now understand why when ballet choreographers have dancing birds they never have wings. But I made the most fabulous wings,” Mizrahi said. “Hopefully they will stay that way and they won’t touch the dancer’s arms when she does a port de bras, since we are just starting rehearsals,” Mizrahi said Thursday. The Guggenheim performance makes its debut Saturday and winds down Dec. 15.

This story first appeared in the December 10, 2013 issue of WWD. Subscribe Today.