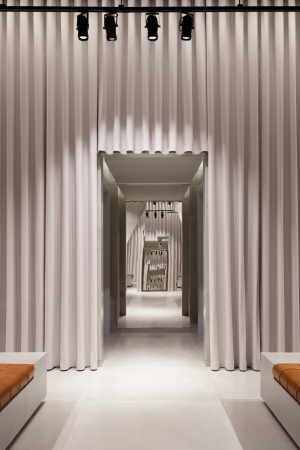 Balenciaga has finally come to Beverly Hills. The house opened the doors to its new Los Angeles flagship, at 353 North Rodeo Drive, on Saturday. The 1,883-square-foot store embodies the new vision of Balenciaga under creative director of Demna Gvasalia. The previous Los Angeles Balenciaga boutique opened in 2008 on Melrose Avenue in West Hollywood under Nicolas Ghesquière’s creative direction.

The boutique, between Gucci and Salvatore Ferragamo, houses both women’s and men’s collections alongside accessories and eyewear. The facade (the one element designed during Alexander Wang’s tenure) leads into an enfilade of three rooms emulating the interconnected salons of the couture house. Stark and geometric, these contemporary reimaginings of the traditional couture spaces underscore the Gvasalia’s new perspective.

The space’s contrasting textures speak simultaneously to haute couture tradition and the contemporary with raw and polished industrial elements such as high-gloss rosewood walls and display tables alongside concrete, cast aluminium, and glass.

The fitting rooms are outfitted in beige cotton twill threaded with red, the same fabric used for toiles in the atelier. The clad walls and carpeted floors emulating the original cabines of Cristobal Balenciaga’s couture house at 10 Avenue George V.

The seating also combines industry and luxury, framing tufted leather with Brutalist concrete, while layered mirrored panels add depth and alter perspective with multiple views. The color palette of grays, stone and metal gets a pop from an emerald green mirrored glass counter in the center of the store.

The Beverly Hills store is the second U.S. flagship after New York, and the brand’s 10th store worldwide.