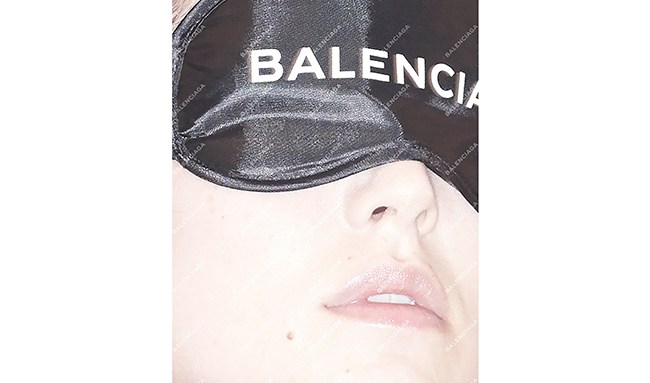 LOGO MANIA: After the Balenciaga Paris souvenir scarf and the Balenciaga Ikea-inspired tote, the brand that elevates generic items into desirable designer objects is bringing out Balenciaga mugs and sleeping masks.

The items are part of a selection of exclusive products created to celebrate Balenciaga’s takeover of the first floor of landmark Paris concept store Colette, as part of a new series of guest slots.

Creative director Demna Gvasalia has concocted a series of events for its residency, scheduled to run from June 19 to Aug. 5, including installations, an art exhibit and free manicures, courtesy of Balenciaga’s nail artist Mei Kawajiri.

Its men’s fall collection, inspired by corporate culture, will be the centerpiece of the display. A selection of looks from the women’s collection, available exclusively at Colette, will be offered in key fabrics and colors borrowed from the men’s line, alongside novelty items like the aforementioned mugs.

Customers will be able to admire “Cake,” a sculpture by German-Norwegian artist Yngve Holen consisting of a Porsche Panamera sawed into four pieces. It belongs to Lafayette Anticipation, the art foundation backed by retailer Groupe Galeries Lafayette, which last year staged a fashion show for Gvasalia’s Vetements brand.

The space will be scented with an exclusive fragrance evoking the interior of a car. In parallel, the windows of Colette’s first floor will feature inward-facing screens showing street scenes filmed in New York, London and Berlin, allowing customers to soak up the atmosphere of other big cities.

From June 19 to June 25, the downstairs windows at Colette will display an hourglass installation consisting of two transparent boxes, in which blue sand will fall from the top of one box over a Balenciaga logo before disappearing into the bottom of the second box in a continuous motion.

In the spirit of a real office, Balenciaga will bring in two digital garment printers allowing customers to personalize T-shirts and hooded sweatshirts by choosing from a selection of graphic designs. The line, available from June 19 to July 10, will be limited to 900 pieces.

To mark the annual Fête de la Musique on June 21, it will put on sale a limited edition of 100 vinyl records featuring the soundtrack of the women’s fall show by Boyfriend. Kawajiri will be on hand from July 2 to 6 to offer customers exact reproductions of nail designs featured in previous women’s and men’s shows.