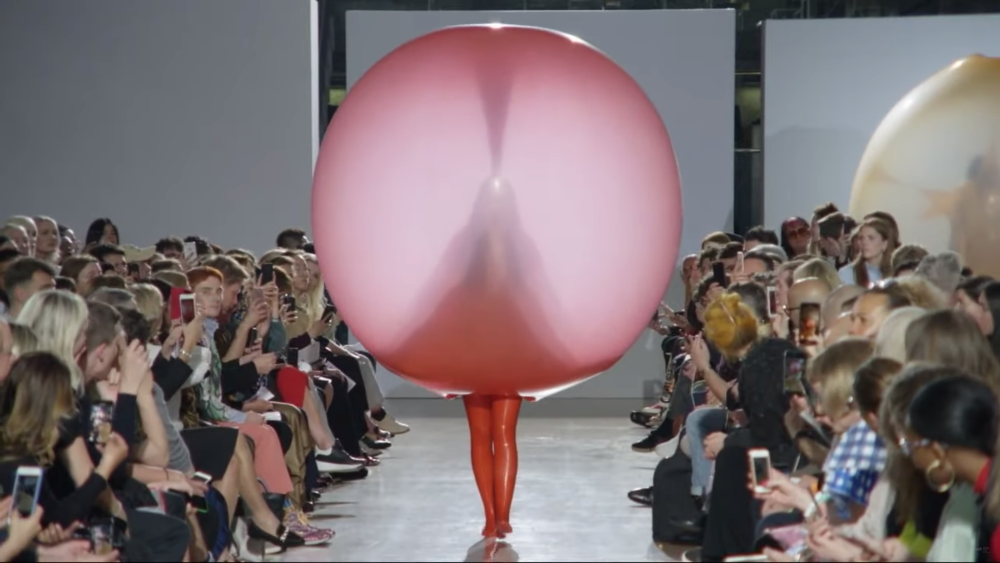 Fredrik Tjaerandsen, a Norwegian native who has worked in Balenciaga, Louis Vuitton, Craig Green and J.W.Anderson won the L’Oréal Professionnel Young Talent Award, the highest honor the college presents to its design students. Tjaerandsen closed the show with a number of colorful giant balloons. Models walked down the runway and leaked the air halfway, turning the balloon into a rubber dress. Such magical transformations were received with cheers and applause from the audience.

“My collection is inspired by an almost indefinable moment when a human’s self-awareness becomes active and sentiment,” said Tjaerandsen. “I have strived to develop a process of experimental practice and development through which I could react and create my own expression of this moment and experience of being in that moment.”

“The rubber I use is sourced from a company that has its rubber production in Sri Lanka where they support and buy their rubber from local rubber growers. I have constructed these pieces with an air pressure system that lets the wearer control the air-flow. Whenever the wearer wants to deflate they open a latch inside to release the inverted bubble part and then dives out of the deflating bubble. The garment within and the bubble is all in one piece and I designed it to have as few seams as possible,” he added.

Japanese design student Fumuka Oshima and Azerbaijan born Fidan Novruzova were joint third runners up. Oshima’s collection showcased a variety of solid men’s wear skillsets that can be easily integrated into any Parisian fashion house, while Novruzova wrote a new chapter on Eighties power dressing, featuring green and black striped pussy bow blouse and spiral cut skirt that suspends itself on the waist.

Standout students also included the LVMH Grand Prix recipient Sydney Pimbley, whose knitwear collection was inspired by her Welsh heritage and her grandmother’s hoarding habit. Deconstructing and remaking the clothes as new garments, it sparked a good dose of resemblance to the late Judy Blame’s artistic vision.

Chinese design student Chaney Diao, who is the recipient of the JNBY Award, presented a collection that both embodied restraint and rebellion. Her design might look normal in the front, but looking from behind, it would appear to be the total opposite.  One model was carrying a molded Victorian gown with wheels while being topless and her final look was a model carrying a giant cross with a sheer layer of the crucifixion covering the model’s naked body.