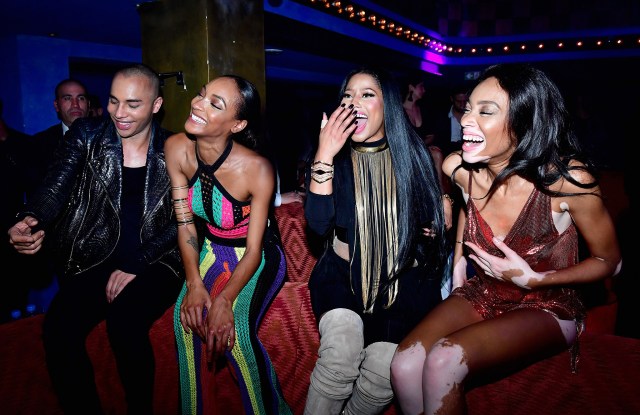 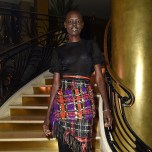 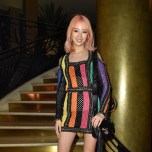 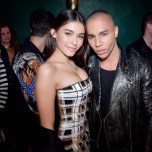 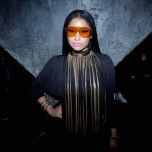 “Let’s give it up for Olivier Rousteing,” could be heard over the microphone as a roar of approval went up from guests at the Balmain after party.

Singers Madison Beer, Nick Jonas and Jorja Smith; models Jourdan Dunn, Cindy Bruna, Winnie Harlow, Sara Sampaio and their fellow members of the Balmain army descended on Manko, a Parisian-Peruvian cabaret on Avenue Montaigne, below the famous Théâtre du Rond-Point to toast the man of hour, whose fierce fall collection was shown earlier in the day.

The designer certainly knows how to federate a tight cast of PYTs, all of whom have big projects coming up.

Blogger Irene Kim, who sported a “Femininity with a Bite” T-shirt in New York where a climate of resistance and activism animated the industry, said Wednesday’s H&M Studio show left her with an impression of inclusiveness and love. “It was a great way to start my fashion week,” she said. “The vibes have been positive and supporting. No bullies in the front row, we are here to enjoy fashion and everyone’s company and creativity.”

Grace Bol was looking forward to indulging in her guilty Parisian pleasure. “I love walking in the park from the Louvre to the Champs-Élysées,” she admitted. “But I’m fantasizing about heading to an island after fashion week. I need the beach!”

Others were heading straight back into even busier times.

Smith, fresh off her American tour gone supernova thanks to a shout-out from Drake, is heading on a British tour that kicks off on April 1 in the northern town of Birmingham. “No new album yet. Soon I hope, I’m working on more music,” she said.

Model Alla Kostromichova — who was in town only for Balmain — is flying to Ukraine rather than home to New York for Ukraine’s “Next Top Model.” “I’m not going to take Tyra’s ‘smize,’ but I have perfected my stern face,” she said, demonstrating a no-nonsense look.

The party was only getting started for Justin Bieber’s protégée Madison Beer, who will turn 18 on Sunday. Despite the milestone, the singer is planning on a low-key dinner with friends. What she is most looking forward to is “concentrating on music and going on tour, which I’ve been dreaming about for so long.” As for her new song, she hinted that it may be dropping on the big day.

Slipping in as the cabaret performance was starting was Luka Sabbat, whose recent art installation in New York featured many pictures snapped in Paris. “There’s a lot of things for Paris, but right now, I’m doing a lot of things for myself. So you all need to be ready to know me,” he said, as Nicki Minaj swept in as well.