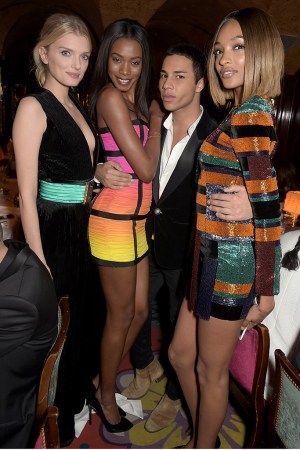 ANNABEL’S BELLES: Olivier Rousteing held court at Annabel’s in London during a dinner to mark the opening of the brand’s new store on South Audley Street in Mayfair.

“I’m from Paris, I love Paris, but I’m not afraid to say it – London is so much more inspiring,” said the designer, adding that he shoots over to the British capital once a month for work and pleasure. “It’s the way the women dress, the emotion the city gives you. I just love it.”

Dunn, meanwhile, has been busy working in front of – and behind – the camera. She made a mark in February as the first black model to appear on the cover of British Vogue for more than a decade, and is at work on a children’s collection.

“My son is my muse, and he even helps me with the mood boards and fabrics,” said the model of her five-year-old Riley. She doesn’t have a launch date yet for the line – which will be unisex – and is currently in talks with potential partners on the project. Her spare time, meanwhile, is all about Riley. “For the moment, I’m being mum.”