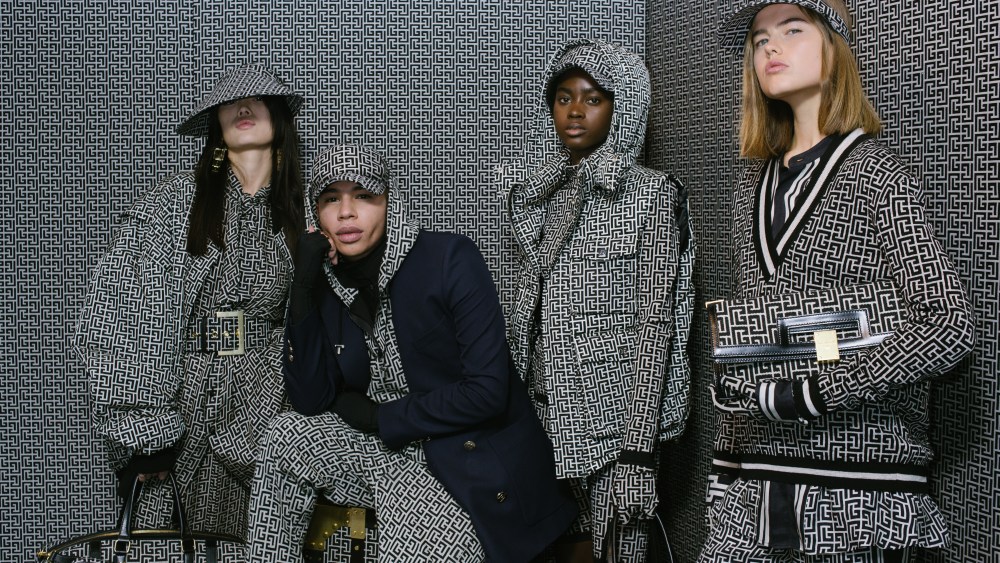 WINDOW DRESSING: If the year 2020 was all about the rush to online, Olivier Rousteing — he of the washboard abs and slick dance moves on TikTok — has a surprising message: Digital is not enough.

That’s why he soldiered ahead with a physical fashion show in September; why he loaded a barge with vintage Balmain and the velvet-throated singer Yseult for a summertime spectacle, and why he crouched in the window of Balmain’s flagship boutique in Paris on Wednesday and shot his pre-fall campaign in front of a young crowd gathered on the sidewalk.

“I miss the faces behind the clicks,” Rousteing said. “I miss life outside. I miss the beauty of Paris. And here in the store, this is where it all starts. You understand the Balmain universe — it’s bigger than a homepage.”

On Wednesday, the sprawling, two-level boutique at 374 Rue Saint-Honoré in Paris, while still fully merchandised, was also packed with models, technicians and Balmain executives — as bustling as any backstage. Meanwhile, the window — wallpapered with an archival monogram — offered the public a rare chance to watch a live fashion shoot. (The spectacle was also streamed live on Balmain’s YouTube channel.)

Boasting 6.3 million followers on Instagram, Rousteing acknowledges that he’s a master of the selfie, and at leveraging social media. “But digital is not enough. We need to be careful with the way fashion is going now because we are building emotions. And the computer, or an iPhone, cannot give the entire emotion that we want.”

Rousteing’s public fashion shoot was also a way to celebrate the fact that French authorities recently allowed nonessential retail businesses to reopen after a monthlong shutdown.

The 75-year-old house has a history of incorporating its stores into campaigns. Founding couturier Pierre Balmain often shot his collections on the street in front of Balmain’s original address, at 44 Rue François Premier.

Rousteing did precisely that recently, arranging luggage and accessories on the sidewalk for Balmain’s new 1945 line that reprised a monogram from the Seventies.

He first picked up his camera for Balmain’s resort collection, shooting the look book himself at a château in Normandy.

The designer said he had plenty of time to practice his skills during lockdown. Before that, he soaked up knowledge about fashion photography, having worked with a fleet of marquee talents including Steven Klein and Inez van Lamsweerde and Vinoodh Matadin.

What does he strive for in a fashion photo?

“I just hope that the picture that I take will be timeless, just like I hope my collection will stay in time,” he said.

Rousteing said he sometimes gets the shot with the first click. “Sometimes 2,000,” he said with a laugh, “but when it’s the one, it’s the one. And I’m pretty sure of what I do. So when I am happy with something, no one can not convince me that I shouldn’t be.”

He said the pre-fall images would first be shared with Balmain’s wholesale clients, and then later be used for online channels.