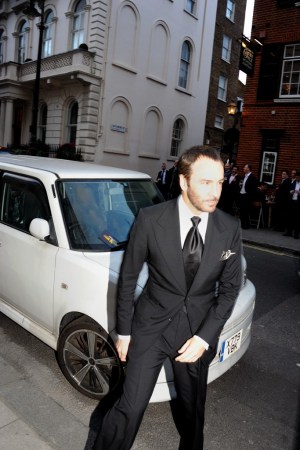 “Are you kidding? If you have a social conscience, you have to vote Obama,” said Tom Ford, who cohosted a fund-raising dinner with Anna Wintour for the president in London Wednesday night.

The dinner was held at the private Mark’s Club, just off Berkeley Square, with about 55 guests paying $15,000 a plate — salmon was on the menu — in support of the Obama Victory Fund 2012.

This was only the first European stop for Wintour, who wore a brown floral hand-painted pleated dress by Tom Ford for the evening. She will be giving another dinner during Paris Fashion Week, with tickets costing $2,500 for the reception and $10,000 for dinner.

David Plouffe, Obama’s leading political strategist, spoke during the evening and fielded questions about the campaign. “It was really engaging. Usually those things are a lot of sound bites, but he was inspiring,” said Buckley.

“It was great, so important,” said Saltzman. “It was so interesting to hear all the questions and answers and it was, for me, hugely educational.” Massenet called it a “lovely dinner in the warm environment of Mark’s.”