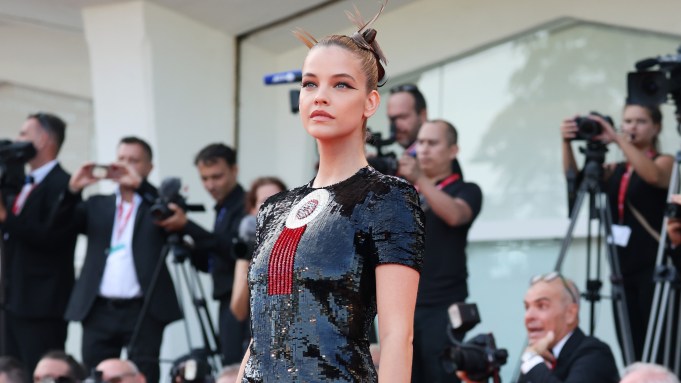 Barbara Palvin had a standout fashion moment at the 2022 Venice Film Festival.

On Wednesday, the former Victoria’s Secret Angel walked the red carpet for the premiere of “White Noise.” She wore a short-sleeved, form-fitting black sequin gown by Armani Privé from the label’s spring 2019 couture collection featuring a silver and red pendant design in the center. She wore her hair in a bun and makeup simple with a cat eye.

She was styled by Marc Eram, who also works with the likes of Soo Joo Park, Dove Cameron and Sabrina Carpenter.

Joining the model, who is an ambassador for Armani Beauty, at the international film festival’s opening ceremony was her longtime boyfriend Dylan Sprouse.

Also present at the premiere were the cast members of “White Noise,” including Adam Driver, Greta Gerwig, Jodie Turner-Smith and Don Cheadle, among others. Other A-list stars who attended were Alessandra Ambrosio, Julianne Moore and Tessa Thompson.

The dark comedy film, directed by Noah Baumbach, is adapted from the 1985 novel of the same name by Don DeLillo and is scheduled to premiere on Netflix starting Dec. 30 after a limited theatrical release on Nov. 25.

The 79th edition of the festival is taking place until Sept. 10 and will debut some of the year’s most-anticipated films, such as the biographical drama on Marilyn Monroe “Blonde,” “The Whale,” “The Son” and Olivia Wilde’s anticipated thriller, “Don’t Worry Darling,” which stars Harry Styles and Florence Pugh.