The Re-Engineered collection is being sold at Bloomingdale's, Orvis and the company's own stores.

After 125 years, it’s still a family affair for Barbour.

The U.K.-based brand is still owned and operated by the founding family and the company celebrated that milestone Tuesday night with an anniversary event at a rooftop event at Gallow Green on the west side of Manhattan.

Vice chairman Helen Barbour, a fifth-generation descendant of founder John Barbour, said the company had already started the celebration in the U.K., with an event during London Fashion Week and also a private party for employees at its South Shields headquarters.

Her mother and chairman, Dame Margaret Barbour, did not travel to New York for the event, but her daughter said 2019 also marks the 50th anniversary of her mother running the company, another cause for celebrating.

At the event, Barbour also showcased its Re-Engineered collection of ready-to-wear and accessories for men and women.

Helen Barbour said the idea of a Re-Engineered collection came to the forefront a few years ago when she was looking at the company’s web site and thought it would be timely to introduce an update of Barbour’s classic styles. The result is a collection that updates popular styles from different decades, many of which were designed by members of the family. 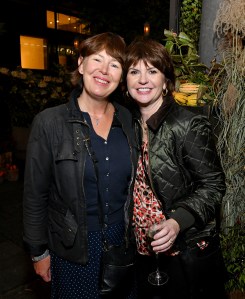 That includes the Icons Haydon Wax, a three-quarter length oilskin cotton jacket based on a style first introduced in 1910, as well as the International Six Day Trials jacket that was based on a model created by motorcycle enthusiast Duncan Barbour in 1936, while the Durham and Bedale derive from models in the Sixties and Eighties. The Beach Sports jacket was worn by Daniel Craig as James Bond in 2012, and it has been reinterpreted in styles for men and women.

“We’ve always been very utilitarian and we’re still embracing that, but also fashion as well,” she said.

Although the brand is still focused on its outdoor heritage, it has also offered a number of popular collaborations in the past several years, including with adventurer Ben Fogle, U.K. model and designer Alexa Chung, and the late Steve McQueen. Barbour said the company will continue to partner with other influential people, but for now, their names are “top secret,” she said.

What wasn’t a secret was the film directed by Antony Cook of Ridley Scott Associates to celebrate the brand’s history. That relationship also resulted in Scott and his daughter designing special directors’ jackets for men and women that were on display, along with some historical pieces shipped in for the event from the company’s archives in the U.K.

The Re-Engineered collection is being sold at Bloomingdale’s, Orvis and the company’s own retail stores.