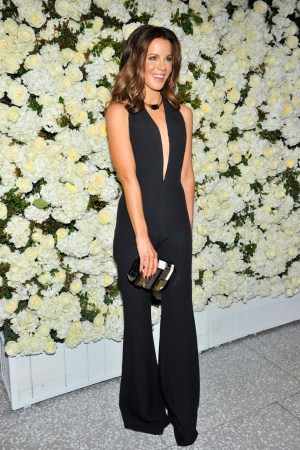 BACK IN L.A.: The Beckhams may have retreated back to London a few years ago, but the couple is clearly finding it difficult to part ways with their Stateside port in Los Angeles. “This was my home for six years and will always be my home. We still have our house here and we love coming back,” said Victoria, who has been on the West Coast for the past two weeks. “There’s a spotlight on L.A. and rightly so because it’s the most relevant red carpet there is. The celebrities are here, the clothes, and the red carpet events,” she added. The designer had spent the better part of her Tuesday at Barneys New York Beverly Hills to fete the store’s launch of her collection with a trunk show and dinner.

“Wherever a woman is from she wants to put out the best version of herself,” she continued. “We are all fundamentally the same. Women here, they want to feel sexy and powerful. I love that. I met so many women today who’ve got great bodies and boobs and a bum and they want to look sexy. I want to do that for them. That’s why I’m doing what I do.” Several of those very women were among the dinner guests at Fred’s, including Gwyneth Paltrow, Rose Byrne and Eva Longoria.

“I’m definitely a fan,” Longoria said. “I’ve looked to Victoria for fashion advice even before she had a line. I love her style.”

Byrne, clad in a black suit from the designer, added, “I’m more of a tomboy – I wear Bobby’s, my boyfriend’s, clothes whenever I can. But she does both sexy dresses and more tailored pieces, which I love.”

David Beckham played proud hubby, chatting up Christopher Bailey and David Furnish for most of the evening. Later, he held court at his own table with James Corden and Kate Beckinsale while his wife made her rounds. While Victoria made the trunk show a family affair, toting children Romeo and Harper along, Beckham enlisted a babysitter for the dinner. “I took them home for baths,” she said. “And told them, ‘It’s mummy and daddy time now.’”