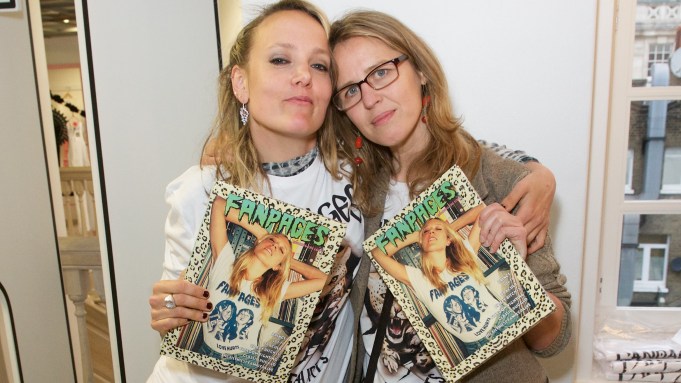 FRIENDS AND FANS: Bay Garnett and Kira Jolliffe, founders of the Noughties antifashion magazine, Cheap Date, have reunited to launch Fanpages, a compilation of one-page fanzines published by Idea Books.

The duo tapped a variety of friends and the 60-odd list reads like a Who’s Who of style, including Erdem, Katie Grand, Stella Tennant and Bella Freud, who have created a mélange of photos, illustrations and full-on essays on their pet subject.

The launch party took place this week at London’s Dover Street Market with guests including Edie Campbell, Daisy Lowe and Laura Bailey. The book costs 35 pounds, or $50, from Idea Books.com

“I was touched and surprised by how much effort people had put into their pages,” said Garnett.

In the book, Sonia Rykiel’s Julie de Libran delivers a visual ode to stripes, from tigers to David Bowie’s iconic monochrome suit, while Simone Rocha extols her love of the veil, illustrated by mass cards from her grandmother, and vintage Holy Communion photographs.

Who knew Bella Freud has an obsession with school uniforms? “My school actually abolished them,” she said, “I had to pretend I was happy as otherwise it would have been uncool.”

Garnett said the biggest surprise was “Chloë Sevigny’s pin board from when she was about 11.” The actress contributed a shot of her tween fixation with River Phoenix, Johnny Depp, Jason Bateman and Rob Lowe, which she called “Teenage Heartthrobs c.1987.”

“It’s definitely weird when you actually meet your idol,” said Sibling’s Cozette McCreery. The lid of her school desk had been papered with images of The Specials’ Terry Hall and some years later a friend set them up on a blind date. “I was sweating so much I kept my coat on for the whole evening.”