The brand's 25th anniversary retrospective, “Living the Bon Chic Life,” drew a slew of starlets, stylists and bloggers to the company’s Vernon headquarters. 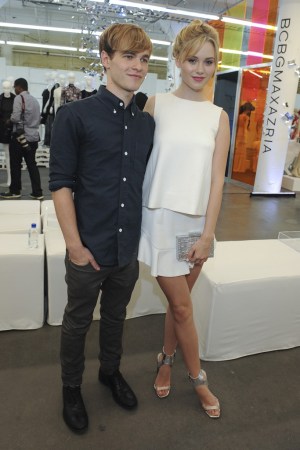 LIVING THE BON CHIC LIFE: BCBG’s 25th Anniversary Retrospective celebration, “Living the Bon Chic Life,” drew a slew of starlets, stylists and bloggers to the company’s Vernon headquarters to check out the extensive exhibit featuring hundreds of mannequins  and fashion images from its quarter-century history. Vanessa Marano, Rose McIver, Ginny Gardner, Jeanette McCurdy and Megan Martin were among the fresh faces who stepped out to admire the display and meet Max, Lubov and Joyce Azria. “I love their dresses in general because they’re youthful, fresh and pretty reasonable,” said CW actress Lindsey Morgan of “The Hundred.” “They always fit perfectly,” said Brianne Howey, star of ABC Family’s “Twisted” and the upcoming “Horrible Bosses 2.” Howey veered from her usual black in a bright red peplum dress. Also working some pops of color was “Entertainment Tonight” host Rocsi Diaz, in a floral lace sheath. “I love that it’s covered up yet has some sheer undertones. It makes guys take a second look,” she said, noting, “I feel like Sofia Vergara.” Diaz next heads to New York to cover the Met Ball, where she’ll most likely don a Max Azria Atelier creation.