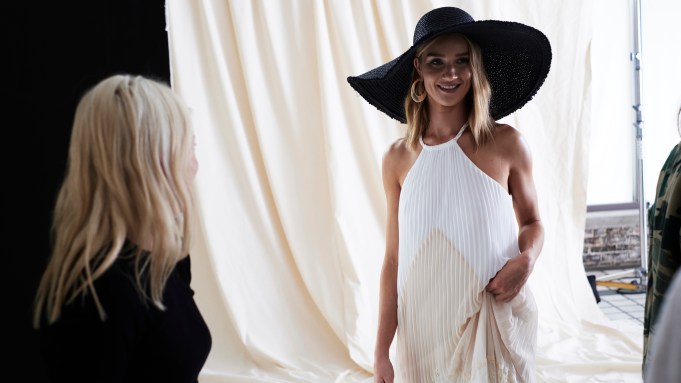 For its 30th anniversary, BCBG Max Azria is heightening its profile by appointing stylist Kate Young as creative consultant and tapping Rosie Huntington-Whiteley to appear in its spring 2019 campaign. It’s a new move for the contemporary brand founded by Max Azria in 1989.

Young, who signed not long after Marquee Brands took control of BCBG, is working alongside creative director Bernd Kroeber, who worked with Joyce Azria as part of BCBGeneration team.

“I’ve consulted for many brands, but no one really does this,” Young said of taking on a public consulting role.

“I have a sort of old school love for the brand. For me it has this association with moving to New York, which sort of goes with the ambitious working stylish girl,” Young said. “It’s fun collaborating together on colors and shapes. I’m just trying to bring a little of my aesthetic in.”

“I’ve worked nearly a year with Kate and her sensibility and her eye is so refined,” Krober said.

The spring 2019 collection picks up where former creative director Lubov Azria left off, fusing modern and romantic in many of the brand’s signature looks from pleated color-blocked dresses to power suiting to sleek evening gowns and fashion-forward voluminous dresses.

“There is a kind of ease. Nothing’s too tricky, it’s really straightforward. It’s really chic and styled-seeming but uncomplicated,” Young said.

“Most women have different sides to themselves. This season it’s more of an ageless tribe instead of thinking, ‘What does a 20-year-old need versus what does a 50-year-old need?’ It’s actually the same woman, just different aspects of her life,” she said.

Kroeber said he was designing for a “modern goddess” when imagining the power suiting, sweater dresses, pajama set, denim and ruffled dresses. The color palette was inspired by sea, botanicals and earth tones.

The campaign, shot by Zoey Grossman at Hudson Lofts in downtown Los Angeles, made reference to the theme with Greek statues and columns as props.

Said Huntington-Whiteley, “The clothes really convey everything. I think the messaging is about an ambitious woman, positive, upbeat. She’s a go-getter and she wants to be stylish and put together at the same time,” she said.