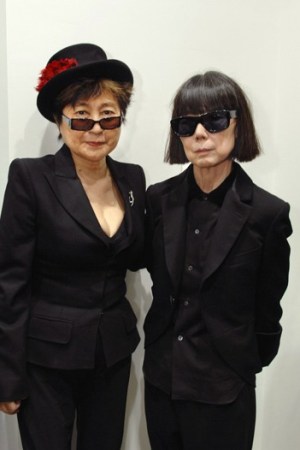 BEATLES IN TOKYO: Comme des Garçons feted its much-anticipated Beatles collection Friday night in Tokyo. Guests at Trading Museum, a new concept store by Comme des Garcons that stocks an eclectic mix of clothing, accessories and other odds and ends for display or sale, milled about listening to Beatles tunes and browsing the collection. Rei Kawakubo was also on hand, dressed in her trademark sunglasses and head-to-toe black. Yoko Ono cut a similarly dramatic figure. Flanked by security people, she greeted Kawakubo briefly before posing for a quick photo op and then taking a short tour of the store. Adrian Joffe, chief executive officer of Comme des Garçons International, said reaction to the line was positive thus far. “People want to buy them now, but we’re not selling [until Saturday],” he said.

BODY OF WORK: Delfina Delettrez Fendi presented her new jewelry collection, Anatomik, at New York’s Opening Ceremony Thursday night. The Fendi family heiress showcased her borderline obsession with the human body through an array of anatomically inspired pieces in the shape of eyes, lips, hands and skulls. Styles ranged from a hand-shaped sterling silver cuff cradling semiprecious stones to a sapphire and gold skull ring with cabochon sapphires, pearls and black and cognac diamonds. “I have always been fascinated with the body; I don’t know why,” Delettrez Fendi said. “From the mouth to the feet, it’s very inspiring to me — especially the hands.” Jen Brill, Amy Greenspon and Fe Fendi were among those admiring the Anatomik collection, which retails from $450 to $65,000 at Opening Ceremony’s New York and Los Angeles outposts.

ONLY IN VEGAS: Tiffany & Co. has commissioned three exclusive pieces for its soon-to-open Las Vegas flagship in CityCenter’s Crystals retail Xanadu. The three cover a broad retail spectrum: a silver Las Vegas charm with playing card detailing and “Las Vegas” stamped on the back, which sells for $150; a $1,295 sterling “lucky charm” bracelet, and a diamond-encrusted Tiffany key in platinum that will retail for $15,000. “Vegas as a whole is a different animal than other markets, but we feel that we have a unique range that can reach the highest level of extravagance and the down-to-earth customer,” said Edward Gerard, Tiffany & Co.’s general vice president of retail. “Our new CityCenter store will have the broadest assortment of all U.S. stores at this location.” Tiffany already has stores in the Bellagio and Forum Shops at Caesar’s Palace; the Crystals store, combining polished black marble, stainless steel and iridescent mirrors, will be three stories high with an 85-foot-tall facade along Las Vegas Boulevard.

I LOVE PARIS: While slammed with jet lag after landing from New York, Alber Elbaz was all smiles Friday afternoon as Paris Mayor Bertrand Delanoë presented him with the Grande Médaille de Vermeil de la Ville de Paris, an honorary distinction given to cultural figures who have an impact on the city. In his speech in the gilded rooms of city hall, Elbaz thanked Chloé honcho Ralph Toledano for “opening the doors to Paris” by recruiting him from Geoffrey Beene to Guy Laroche, and to Lanvin owner Shaw-Lan Wang for welcoming him eight years ago as her creative director. Before the presentation, Elbaz mused on the other things he loves best about Paris: “There’s so many things. It’s a dream city and it’s a city of dreamers.” Then, in a “eureka” moment, he added: “I will be original, and I will say Parisians!”

LAURENS TO GREENWICH: Ralph and Ricky Lauren milled around the first floor of their new Greenwich store Saturday, talking to customers who were admiring the new 19,000-square-foot addition to Greenwich Avenue. Roger Farah, chief operating officer and president of Polo Ralph Lauren, was also on the scene, conversing with customers and checking out the merchandise. While scaffolding is still covering up the outside of the store, it didn’t stop passersby from going inside, sipping some Champagne and enjoying the complimentary Polo cookies. “Why don’t you carry children’s?” one customer, with several kids in tow, asked the designer, who seemed amenable to the idea. Between the new Apple store opening down the block, and a personal visit by Lauren himself, Greenwich Avenue was buzzing Saturday.

BIG HAUL: The second auction of objects belonging to Yves Saint Laurent and Pierre Bergé reached a total of 9 million euros, or $13.4 million, more than doubling an initial estimate of up to 4 million euros, or $6 million. Auction house Christie’s said almost all the 1,200 items were sold at the end of the four-day sale, often beating initial expectations by a surprisingly large margin. An umbrella stand originally expected to fetch up to 500 euros, or $745, went for 109,000 euros, or $162,475. A set of Hermès suitcases estimated at up to 6,000 euros, or $8,943, was sold for 29,800 euros, or $44,420. The proceeds from the auction will be destined to HIV research and the fight against AIDS.