David, Victoria and Brooklyn Beckham gathered at William Waldorf Astor’s former office on the Thames, a Victorian jewel of a building. 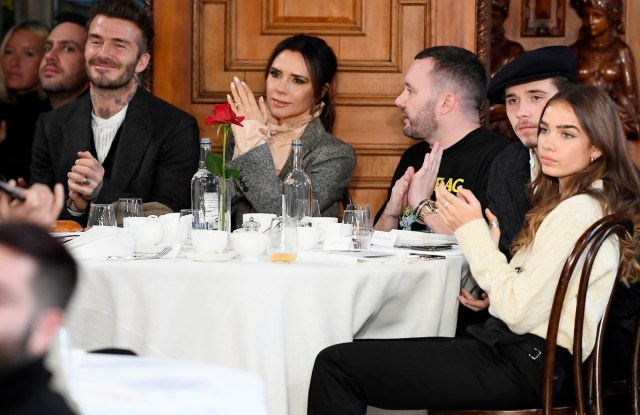 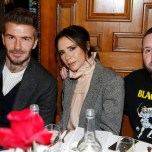 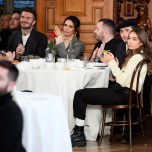 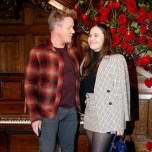 PEAK PERFORMANCE: “We watch ‘Peaky Blinders’ all the time — and dress like that every day,” said Brooklyn Beckham, his bearded face shaded by a charcoal flat cap at the Kent & Curwen show in London on Sunday.

The Beckhams’ eldest son, who was wearing a collarless shirt and peg trousers from the new “Peaky Blinders” collaboration with Kent & Curwen, attended the show with girlfriend Hana Cross, parents David and Victoria Beckham, and BBC TV series’ creator, Steven Knight, among others.

The capsule collection made its debut at the fall 2019 Kent & Curwen show, which took place at Two Temple Place, William Waldorf Astor’s former office and a Victorian gem of a building overlooking the Thames with stained glass windows, wood paneling and Arts and Crafts interiors.

Designed by Kent & Curwen’s creative director Daniel Kearns, the capsule includes flat caps, frock coats, peg trousers and a special rose logo that appears on shirts, tops and knits. He riffed on the look of the actors in “Peaky Blinders,” the hit show that centers on the lives of Twenties street gangsters in Birmingham, England, and the policemen trying to keep them in line.

A beaming David Beckham, who was looking snazzy in a flat cap, gray frock coat, navy blue button-front sweater vest, and high-waisted trousers, said he’s long been “a huge fan of the show,” and approached them about doing a collaboration.

He said the actor Paul Anderson, who plays one of Peaky’s lead gangsters, wished him good luck earlier in the day, and promised to sew some razor blades in his cap next time, referring to one of the gang’s signature moves.

The show’s creator Steven Knight was there, too, and said he based the script on all the stories he heard from his parents growing up. “These men were gangsters — but they were absolute dandies, too, which feeds right into this partnership with Kent & Curwen. We’re a match made in heaven,” he said.

Victoria Beckham was in the mood for some sleek tailoring, too, decked in a gray tweed suit with sharp lapels and flared trousers from her fall 2019 pre-collection. “This collection was very honest and true to David and his style,” she said of the collaboration. “And the show was beautiful, too.”