Kate and Laura Mulleavy joined the crowd at a book signing party at Bookmarc for the photographer's latest book, "Beck." 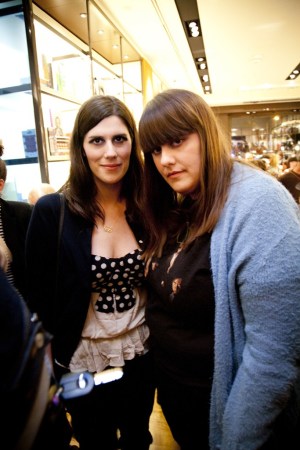 BECKMARC: Photographer Autumn de Wilde, who has shot The White Stripes, Wilco and Death Cab for Cutie, among others, said she’s devoted to two subjects for life: Rodarte and Beck Hansen. Both came together Thursday night at Bookmarc in West Hollywood, where Kate and Laura Mulleavy joined the crowd at a book signing party for de Wilde’s latest, “Beck,” which documents the musician’s career over the course of 15 years and seven albums. “When I was editing the book, I wanted to make sure the breadth of his work was not forgotten,” said de Wilde. Although Hansen is game for almost anything, de Wilde worried he’d resist being covered in colorful tags she’d picked up in a mannequin store for one shot. “The tags were so beautiful, I wanted an excuse to buy them,” she said. “It wouldn’t have worked if he wasn’t so committed to occupying the world he presents.”

Because of his long-standing friendship with de Wilde, Hansen said she makes him comfortable behind the camera. “Taking photos can tend to be an artificial situation, but she has a way of being there, and you are not really conscious of what’s happening,” he said. “She has good ideas. I always like the concepts around the photos because they are something to step into.”