Being Jackie… Sandra Bullock Helps Out… Karl Lagerfeld’s Dark Side… 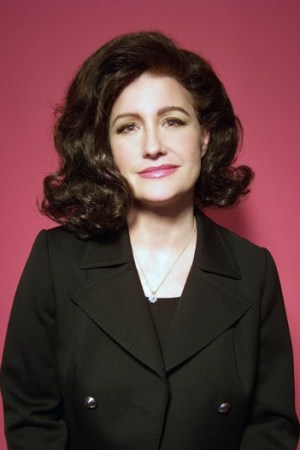 QUICK-CHANGE ARTIST: Artist Karen Finley has built a career through her many disguises. For her newest piece, “The Jackie Look,” she studied the former first lady’s favorite designers — Halston, Givenchy, Yves Saint Laurent, Chanel, Charles Jourdan, Gucci, Valentino, Ferragamo and Oleg Cassini. In describing the research, she sounded like a true Seventh Avenuer. “I would seek out vintage pieces by these designers and study the workmanship. In choosing a costume, I began thinking in terms of line, silhouette and composition,” she said.

She and costumer Becky Hubbert went with a double-breasted Sixties French wool suit jacket with bracelet sleeves that they bought in a Lower East Side consignment shop. For Saturday’s opening night at the Laurie Beechman Theatre, the performance artist will sport slightly flared white pants — reminiscent of the Studio 54 years, a scoop-neck black shell top, the requisite strand of pearls and oversize maroon Gucci sunglasses to polish off the look. Darlene Dannenfelser styles Finley’s wig and also handles her makeup for the multimedia show.

TWO-FOR-ONE DEAL: Sandra Bullock found a way to look glamorous and give back at the same time. After wearing a Bochic bangle to the Screen Actors Guild Awards last month, the jewelry firm will auction the $5,250 Bakelite, gold and diamond bangle to benefit Charity: Water. The auction is part of the jewelry firm’s initiative to dress celebrities on the red carpet. The company will auction off anything worn by a celebrity in 2010, starting with the Golden Globe Awards, and will donate all the proceeds to both Charity: Water, an organization that helps bring clean drinking water to people in developing nations, and Nanhi Kali, which is dedicated to educating underprivileged Indian girls. “We derive so much of our creative inspiration from regions such as India, and in a small way, we hope to enrich their lives as much as they have our own,” said Bochic founder David Joseph, who also designs the collection along with Miriam Salat. All proceeds will be handled and delegated by Executives Without Borders, Bochic’s philanthropic partner.

VANITY FAIR: Fashion is still in love with skulls, up to and including Karl Lagerfeld. He has designed a limited edition scarf to help mark an art exhibition opening today at the Musée Maillol in Paris. “It’s life! Vanitas from Caravaggio to Damien Hirst” has been put together by writer and journalist Elisabeth Quin, who selected paintings and photographs that illustrate vanitas, or symbols of death. Lagerfeld’s scarf features a sketch of Coco Chanel, her outstretched hand cradling a skull. Although not for sale, the scarf was a token for Quin and friends of Chanel. The exhibition runs through June 28.

FULL SKETCH: Fans of late French designer Yves Saint Laurent can pore over every couture outfit he ever sketched thanks to a new catalogue in four volumes, presented in box form. “Yves Saint Laurent Haute Couture: The Complete Works 1962-2002,” provides a detailed running order of the couturier’s 81 collections through reproductions of close to 1,300 presentation boards featuring sketches, fabric swatches and other handwritten details. The guide, published by Editions de La Martinière and the Pierre Bergé-Yves Saint Laurent Foundation, will be available in a numbered edition of 500 that can be preordered for 1,700 euros, or $2,360, until March 10, or purchased for 2,100 euros, or $2,915, from March 11. A bilingual consultation guide and collection of show programs completes the set.

NO PHOTO O CANADA: Dsquared’s Dean and Dan Caten are pumped for the Vancouver Winter Olympic Games. Not only are the Canadian twins designing costumes for the headlining performers at the opening and closing ceremonies, but they will also run with the torch on the morning of Feb. 10 in North Vancouver. Then they will host a party at the Vancouver Holt Renfrew on the night of Feb. 13 to launch a limited edition fleece hoodie that will be available exclusively at Holt Renfrew stores. It is white and boasts “Dsquared” in script above a red maple leaf.

LONDON LIVE: London Fashion Week is upping its game with plans to stream the upcoming fall runway shows live on its Web site, WWD has learned. All designers showing at the official Somerset House venue will have access to the service, while other on-schedule designers can request to use the service, too. In between shows, fashion week organizers will screen short films created by such labels as Hussein Chalayan, Boudicca, Antoni & Alison, Danielle Scutt and Twenty8Twelve on the site. The British Fashion Council plans to drive audiences to the site, londonfashionweek.co.uk/digitalschedule, through e-marketing, Facebook and Twitter. An official announcement is expected today.

BROWNS’ BIRTHDAY: Browns, the South Molton Street store that launched many a designer’s career, is gearing up for its 40th anniversary celebrations this spring. In May, the retailer will mount an exhibition at the soon-to-be-opened Blake Penthouses in Mayfair, which will chart Browns’ vision of London fashion over the past 40 years. The exhibition will spotlight the labels Browns has championed since their inception, including Donna Karan, Calvin Klein and Missoni through to new London names such as Christopher Kane, Roksanda Ilincic and Gareth Pugh. Set designer Simon Costin will curate and design the exhibit, and Browns will celebrate the launch of the monthlong show with a party there in May.

In addition to casting an eye over the past, the retailer has asked 40 designers to create pieces for a special collection to mark the anniversary. The line, called Future Collectables, will be made up of seasonless pieces that will carry a Browns label and the designer’s label. The collection will be sold at Browns’ London stores in South Molton Street and Sloane Street and via its Web site. It will also sell at Grieder in Zurich, BonGenie in Geneva, Quartier 206 in Berlin, and Al Tayer Emirates Tower in Dubai, each of which will host pop-up shops to carry the line.

NEW PLACES: Badgley Mischka will open a 2,400-square-foot flagship in Beverly Hills this spring. The store is across the street from the soon-to-open Missoni flagship on the north end of Rodeo Drive; the luxury eveningwear brand paid about $12 a square foot for the space. Paul & Joe is also coming to Los Angeles, and will set up shop on Robertson Boulevard in the space now occupied by Lisa Kline. Kline, who already cut the size of her women’s store last year and shuttered a warehouse on Melrose Avenue, is moving her women’s apparel into her men’s boutique across the street on Robertson.

Kline isn’t the only person scaling back her retail footprint. Jaye Hersh has closed her celebrity-centric Intuition store on Pico Boulevard in Los Angeles, and her e-commerce site is down, too. Hersh didn’t respond to calls or e-mails; no word on her future plans.

FLOWER POWER: Galeries Lafayette is hosting a show featuring art by Kris Van Assche and Matt Saunders. Called “Picaflor” (Spanish for hummingbird), it kicked off last week with a cocktail party in the department store’s La Galerie des Galeries space. The exhibition includes 12 mirrored, metallic flowers by Van Assche, which perch atop tripods of various heights. People are meant to move up close to sneak a peek (or whiff) of what’s inside. Most of the flowers contain images, either moving or still, black-and-white or color, and including many fashion-related shots — among other subject matters. One flower emits a fragrance concocted by perfumer François Demachy. Also part of the show are 22 portraits by Saunders, who made a film of them that plays outside the gallery space. “Picaflor” runs through Feb. 27.