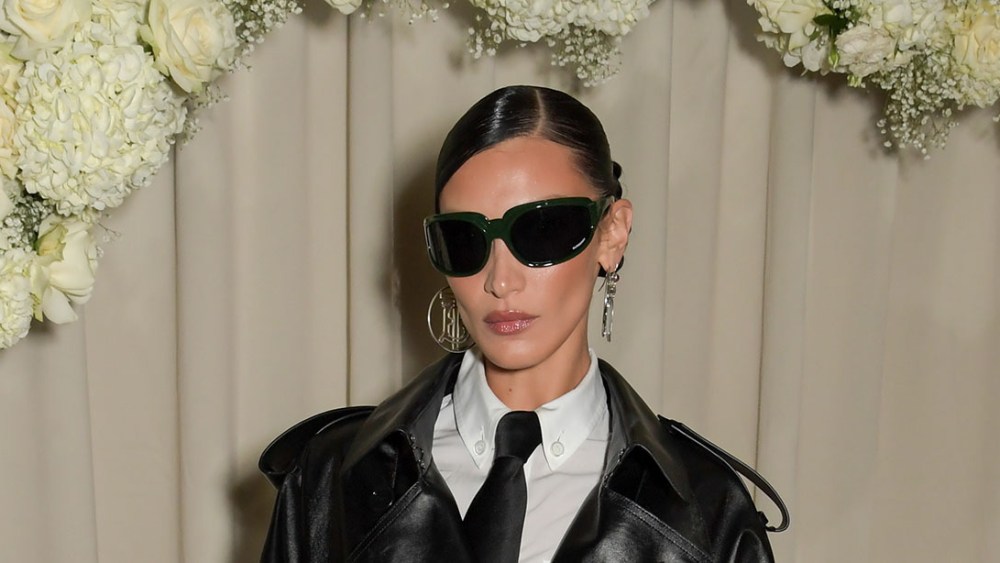 Bella Hadid made a dazzling entrance at Burberry’s after party on Monday in London following the brand’s spring 2023 London Fashion Week runway show.

The model arrived in an ensemble that gave a twist on formalwear-inspired suiting, featuring a white dress shirt and tie under an oversize leather jacket with exaggerated lapels and a hemline that created the silhouette of a flared skirt. She slipped into sharp-pointed heeled boots and accessorized with large gold hoops, silver and gold rings and oval-green rimmed frames.

Before the event, Hadid walked the runway for the design house’s show, debuting a light blue dress with embroidered details and thong-heeled sandals of the same hue.

In March, she appeared in Burberry’s latest Lola Bag campaign alongside Jourdan Dunn, Lourdes Leon and Ella Richards. Earlier this year, she attended a dinner hosted by Burberry at its Beverly Hills flagship for their “Animal Instinct” in-store activation.

For the 2022 Met Gala, she arrived on the red carpet in a monochromatic, gothic-inspired look that included a custom Burberry dress by creative director Riccardo Tisci. Her dress fused a corseted bodice, crystal-embellished sarong element that draped the back, embroidered stockings and sheer opera gloves. She has also walked in several other Burberry shows, including for spring and fall 2020 collections at London Fashion Week.

Hadid has had a busy year. In May, she was announced as Swarovski’s latest ambassador, fronted Balenciaga’s fall 2022 campaign, and featured in Versace’s spring 2022 campaign.