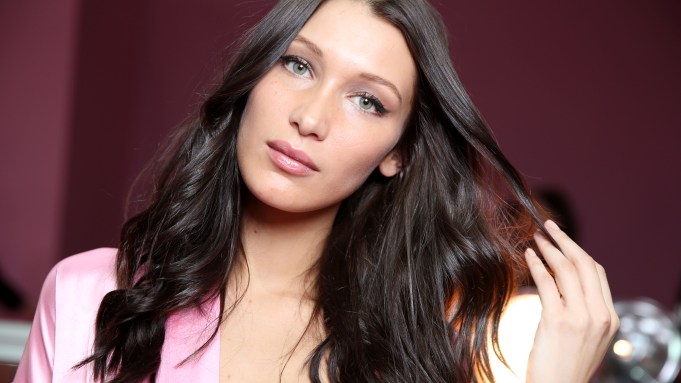 Bella Hadid won’t back down.

The 20-year-old model has signed on to be the face of Tag Heuer, in an effort by the watch company to lure Millennials to the brand.

It is a tough proposition for the age group, which has grown accustomed to using their cell phones as a timepiece. But for Hadid, the idea of a watch extends beyond just function — serving as an accessory and fashion statement as well. “I just wear watches, because it’s easy to be able to look at my wrist. I think, today, it’s beautiful to have a watch — it’s always a classy thing. My dad has always been a lover of watches my whole life. It’s a beauty item, for a classic look. You could look at your phone, but I think it’s easier to have a watch,” Hadid said Monday evening at the Equinox gym on Bond Street, where her ambassadorship was unveiled.

The model had run to the press event just minutes after closing the Oscar de la Renta fashion show, where Monse’s Laura Kim and Fernando Garcia debuted at the brand’s helm. “I had blue makeup on like five minutes ago,” she said.

Such a pace has become common for Hadid, who was also prominently featured in shows by Alexander Wang, Carolina Herrera and Prabal Gurung. The rush had left Hadid Monday in a near-catatonic state. “I’m just so tired right now,” she said apologetically after losing her train of thought.

“It’s so crazy, I’m like exhausted but I’m so happy and so thankful — it’s been such an amazing past two days — I just closed Oscar and cried before I went out — and it’s still going,” she said.

The model has still managed to schedule some family time — and planned to visit sister Gigi after the Tag Heuer event. “I just like to sit on my couch and order food, and watch movies. I don’t get to do very often anymore. I’m taking it one day at a time.”

Tag Heuer has recently signed a bevy of celebrities in Hadid’s age group — including Cara Delevingne, Martin Garrix, and graffiti artist Alec Monopoly — in an effort to grab the cohort’s attention. Much of this advertising will be pushed out through digital channels.

In New York to unveil Hadid as Tag’s face Monday, LVMH Moët Hennessy Louis Vuitton watch division president and Tag Heuer chief executive officer Jean-Claude Biver said: “We have a fully integrated strategy [to lure Millennials], which means that we start with the product, then we have the communication — we also have the price strategy for the Millennials, the media — so we really have the different lifestyle angles complete.”

Speaking in more finite terms about this reapproached pricing model, Biver said: “It means we have to be in accessible luxury. Some of our [LVMH watch division] are inaccessible luxury — like Hublot. Tag has to be in the accessible luxury category — a $990 watch is an expensive watch, but somehow still affordable if you save some money or if you got it from parents for a graduation.”

Biver defines Millennials in the literal sense — consumers born around the year 2000, who are now hitting their teenaged years. “We are building up, which means we are trying to talk to people who cannot buy our watches right now. In other words, it’s like an investment. If we are talking to people born in 1980, we could get an immediate return because many of these people can buy our watches, while Millennials that are 14, 15, 16 years old can dream about our watches. That is what we want to achieve— to make people dream about our brand, our product so that one day they might realize their dream.”