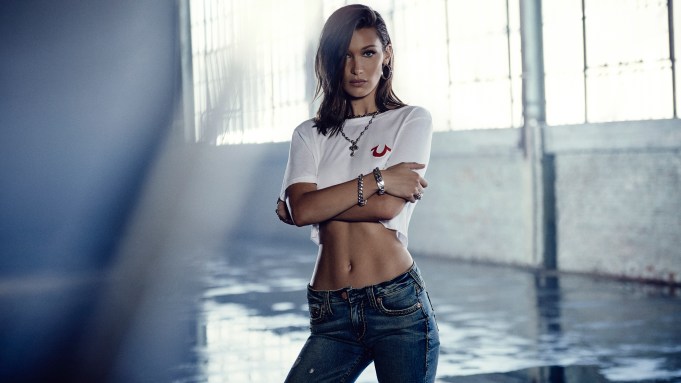 STAYING TRUE: True Religion is betting on a second coming. The Manhattan Beach, Calif.-based denim brand, which set the stage to emerge from bankruptcy late last year, has tapped California native model Bella Hadid to be the new face of the brand.

Like the premium denim stalwart, Hadid is said to embody past and present, edgy and everlasting qualities, at least according to True Religion, which called her “the natural choice to meld the iconic essence of the brand with the modern view of its future.”

An all-star creative team was assembled to shoot the fall campaign, which will begin appearing in media on Aug. 27 and in all store windows across the U.S. and U.K on Sept. 6. Photographer Boo George, stylist Mimi Cuttrell, and hair and makeup duo Jen Atkin and Mary Phillips created the imagery and looks to usher True Religion into a new era that honors the heritage of the brand.

“It was a great experience shooting an iconic denim campaign in Los Angeles,” Hadid said. “I grew up with True Religion and was excited to play a part of the brand’s next chapter.”

According to the brand, Hadid’s voice was not only an inspiration, but an integral part in imagining the campaign. The first three images show Hadid in an edgy industrial setting, wearing vintage washed mid-rise jeans and cropped logo T-shirts, or high-waisted indigo jeans and no shirt, flaunting the signature horseshoe stitching on the back pockets.

It’s True Religion’s first major model moment in a long time. In 2017, the brand tapped up-and-coming actress Herizen Guardiola and Mötley Crüe drummer Tommy Lee for an edgy digital campaign, and in 2015 it collaborated with NBA star Russell Westbrook on a collection.