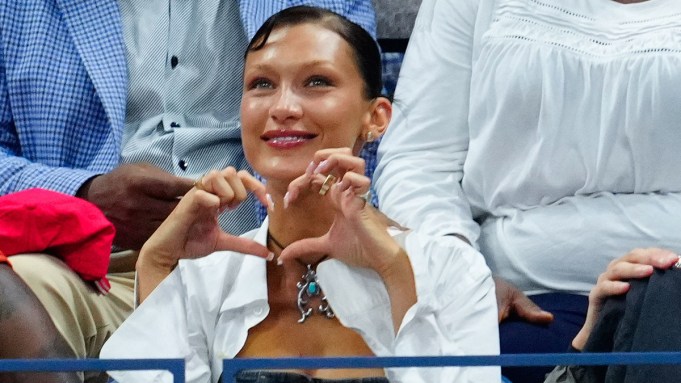 Bella Hadid attended the U.S. Open on Monday for Serena Williams’ victorious first-round match at the annual tennis tournament in Queens, New York. The model was seen at USTA Billie Jean King National Tennis Center in the stands, cheering for Williams and making a heart-shaped gesture with her hands.

Hadid wore a denim corset with a buttoned center with a cropped shirt and oversized patchwork jeans. She accessorized with heart-shaped stud earrings, gold rings and a statement necklace.

Arriving at the game, Hadid was seen wearing a pair of oval-lensed frames and Eytys sneakers with a black, white and gray colorway. She paired her look with a Balenciaga shoulder bag that incorporated a silver chained element, quilted design and the fashion house’s signature emblem.

Last week the rapper premiered the official music video for his latest single, “CODE,” featuring Hadid. In the video, she wears head-to-toe Balenciaga in a series of looks such as a rhinestone-adorned bikini, shiny crystalized sheer boots, opera gloves, a chained necklace and an oversized faux fur coat.

The U.S. Open is the last Grand Slam event of the year, a tennis tournament attracting viewers and players from all over the world. The matches are held at the USTA Billie Jean King National Tennis Center in New York City, with Arthur Ashe Stadium as the main court. It is the 142nd year of the tournament, with Daniil Medvedev and Emma Raducanu as reigning men’s and women’s singles champions, respectively. It also marks what is expected to be Serena Williams’ last tournament. The 23-time Grand Slam champ is expected to retire after playing in the championship for her last time. The U.S. Open runs to Sept. 11.