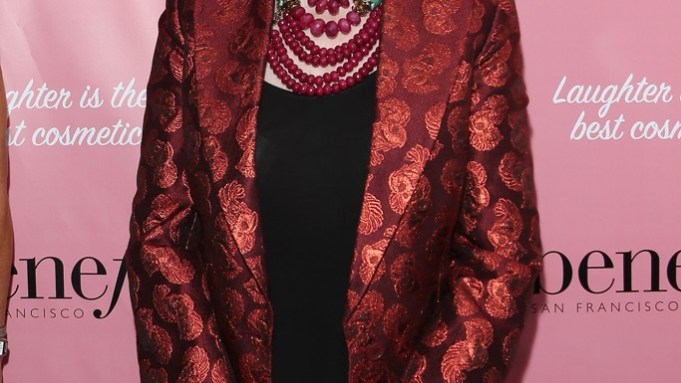 POLICE FORCE: Benefit Cosmetics toasted the start of New York Fashion Week with a cocktail party Wednesday night celebrating strong-minded women and the two-year anniversary of its best-selling They’re Real Mascara. The honorees, selected by Benefit executives and the E Fashion Police team, included Ashley Tisdale in Alice + Olivia; Chrissy Teigen in Vera Wang; Jodie and Danielle Snyder of Dannijo, in Proenza Schouler and a vintage gold strapless number; Stacey Bendet of Alice + Olivia in one of her brand’s designs, and Joan Rivers, who spoke to WWD about today’s style icons. “[In terms of fashion,] Cate Blanchett is untouchable,” Rivers said. “Also, Halle Berry [and] Angelina Jolie, sticking out that leg [at the 2012 Academy Awards], she looked good. She was aerating because she had a yeast infection, but it started a trend.” Rivers, who was joined by her daughter Melissa, in Current/Elliott pants and a Lanvin top, also blasted select young up-and-comers for their lack of fashion and common sense. “Oh God…Miley Cyrus,” said Melissa Rivers. “In the last two years they took her from child star to sex symbol, and in three-and-a-half minutes she blew it up. We all [had been] looking at her in terms of fashion, she was making best-dressed lists, and it all went to hell in a handbag, all from one show.” Joan provided some advice for young attention-seeking starlets, or “sluts,” as she called them. “Don’t go commando if you are wearing short short shorts,” mused Joan Rivers, in Stella McCartney and Joan Rivers Classics Collection jewelry, who also made mention of her go-to beauty secret, “formaldehyde.” When asked which man, living or dead, could get Rivers back on the dating scene, she responded without hesitation, “Moses. I love a man in sandals. It says he’s athletic, he’s serious and he has nice feet.” Held at the A60 Rooftop Terrace at the Thompson Hotel, the event drew names like John Legend, Zanna Roberts Rassi and Giuliana Rancic.