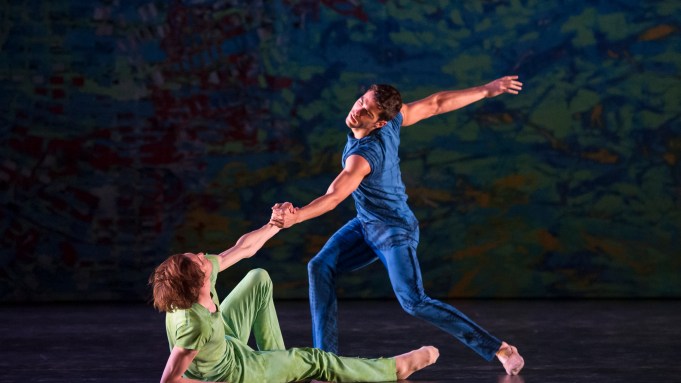 JEWEL TOWN: London’s Sadler’s Wells theater provided some post-referendum distraction to ballet fans on Friday, hosting the world premiere of Benjamin Millepied’s new work, “On The Other Side.”

The ballet is the third and final installment of the choreographer’s “Gems” trilogy, a collaboration between his L.A. Dance Project and jeweler Van Cleef & Arpels.

The one-piece costumes were designed by Ermenegildo Zegna’s new creative director, Alessandro Sartori. They were made from jewel-toned velvets — yellow, blue, green and red — and the designer described them as “rich, but something a bit young and grungy, at the same time.”

The score was specially composed by Philip Glass, and the set designed by the American artist Mark Bradford.

Van Cleef has a long-standing relationship with the world of dance. The arts lover Louis Arpels commissioned the first of the maison’s signature ballerina clips in New York in the Forties.

During the interval, guests caught a glimpse of Millepied’s wife Natalie Portman saying a quick hello to him, while Van Cleef’s president Nicolas Bos talked about the trilogy. He said it nods to a collaboration between Van Cleef and the New York City Ballet cofounder George Balanchine who created the ballet “Jewels” in 1967.

Inspired by emeralds, rubies and diamonds, it was one of the ballet world’s first abstract productions.

“’Gems’ is about Benjamin’s world,” he said. “He was inspired by the same three stones [as Balanchine] but used his own interpretation.” The first part, “Hearts and Arrows,” was inspired by diamonds and the idea of light while the second, “Reflections,” captured the energy of rubies. The third installment, “On The Other Side,” is about emeralds.

Speaking earlier that day, Millepied said that the three acts constituted “an emotional journey” with “a strong and hopeful sense of lasting love and community amidst the uncertainty that we are feeling right now.” Of the male and female duets, which nodded to same-sex relationships, he said: “They are modern people, living in the modern world. That just feels right.”

During the post-performance dinner, which was catered by the Michelin-starred chef Hélène Darroze and took place backstage, Millepied said that being at Sadler’s Wells felt like a homecoming. He first performed there in 2001.

He said that while he hadn’t visited any diamond mines in the name of research, he did choose and design his wife’s engagement ring. He also revealed that he is planning another production for next year. “It will be an online premiere, live from Texas!”

Sartori said he and his old friend Millepied are currently brainstorming about future collaborations, while Bos said a special jewelry collection would be unveiled in September, a collaboration with the theater director, set designer and lighting specialist Robert Wilson.

Following the London premiere, the “Gems” trilogy production will travel the world. The next stop will be Paris’ Champs-Elysées Theatre in September.