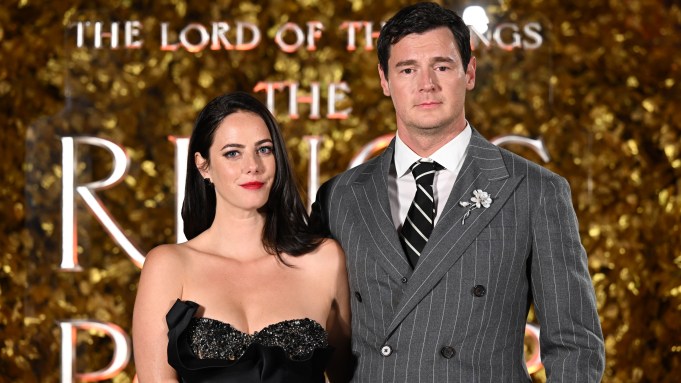 Benjamin Walker and Kaya Scodelario had a standout couples’ style moment at the London premiere of “The Lord of the Rings: The Rings of Power” Tuesday night.

The couple, who has been married since 2015 and share two children, walked the red carpet together, each in their own high-fashion look. Walker wore a gray striped suit with a matching black-and-white-striped tie from Ralph Lauren, while Scodelario went with a black lace-embellished Marchesa gown. Both stars were styled by styling duo Zadrian Smith and Sarah Edmiston.

Walker stars as Gil-galad in the Prime Video prequel series, which is set thousands of years before the original “The Lord of the Rings” triology and “The Hobbit” films. The series is set to premiere on the streaming service on Friday.

While this is Scodelario’s first appearance during “The Lord of the Rings” press tour, Walker has been making an impression for his suits at press engagements over the last few weeks. Most recently, the actor attended the New York premiere wearing a Kente brown pattern bespoke suit from U.K.-based label Ozwald Boateng.

He has also worn looks like a Dior navy wool suit at the Los Angeles premiere, and a pale yellow suit by London-based tailor The Anderson & Sheppard Shops for the premiere in Mexico.

Walker spoke with WWD about taking on the role in the prequel series, saying: “It’s genuinely incredible. My first impression was, man, I gotta get a bigger television. It’s epic. We spent so much time away from our families and away from our home and places of comfort that for it to turn out so well, it was really gratifying and I’m really proud of everybody [involved].”