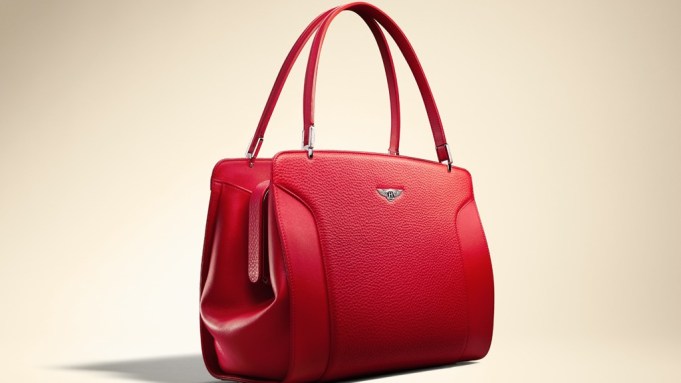 BENTLEY LAUNCHES BAGS: Bentley Motors is driving into the luxury accessories arena for the first time with a line of handbags aimed at capturing women’s interest in the storied marque. Created in a collaboration between Daniele Ceccomori, head of Bentley product design, and French leather goods designer Vincent du Sartel — who previously held design roles at Louis Vuitton and Loewe — the designs will make their debut on Aug. 18 at the Pebble Beach Concours d’Elegance in Pebble Beach, Calif. There are two styles in the initial collection, each available in a range of colors inspired by Bentley paint finishes, such as Fireglow Red, Linen, Neptune Blue and Imperial Blue.

The Barnato bag ($7,000) is inspired by the late English aviatrix Diana Barnato-Walker, the first British woman to break the sound barrier and a loyal Bentley customer. The Continental ($5,500) is named for the Bentley auto model of the same name, with a horseshoe shape that defines the back of the car.

Bentley will sell the bags through a series of trunk shows and events in the U.S., U.K., Asia and the Middle East. The bags are Bentley’s first foray into the fashion space, spearheaded by Dr. Ariane Reinhart, a member of the Bentley board. “More than luxury vehicles, Bentley’s models today are capturing more and more women’s hearts through their elegant lines and flawless materials,” she said.