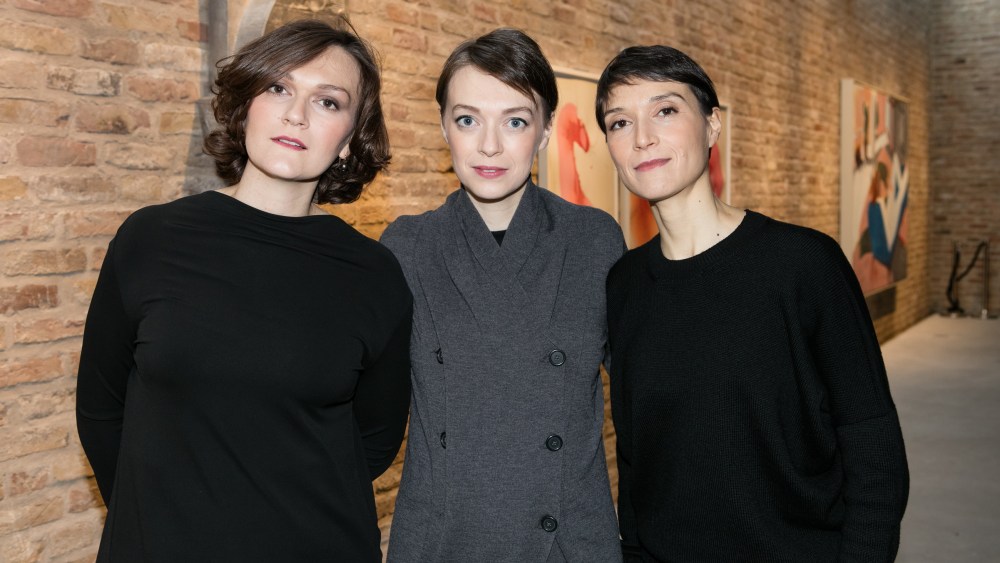 Before the action began, WWD met up with the three Giusti sisters — Sara, Vera and Marianna — to find out more about their interest in art, and their art of running a family shoe business in its third generation. The self-declared art lovers are also fans of Germany, where each of the sisters lived for a time during their studies and which is now the brand’s second-most important export market. So the König collaboration seemed like a natural fit, especially because “we knew the location was very special, and that there’d be a lot of women artists,” said Vera. AGL, the sisters noted, is the only shoe company in Italy managed by women, and the brand is not only shaped by female creativity, but in terms of business, “takes a girl power-esque approach.”

However, the Berlin evening was not prompted primarily by business thinking. “It’s about enriching ourselves, and sometimes the links can be unexpected,” noted Vera. “We were on the plane talking about Claudia Comte, and my sister Mari said she was so surprised, ‘because I work with wood, just like her, everyday.’ Even the shapes and materials are similar,” she went on. They were also very taken with Katharina Grosse’s use of color. The artist has previously collaborated with men’s designer Julian Zigerli, so perhaps painterly color-striated boots could be the next novelty in the AGL line-up.

More girl power: AGL is actively working on celebrity placement with the likes of Naomi Watts; Gigi Hadid; Kendall Jenner and Cate Blanchett, and Maggie Gyllenhaal, shot by Bryan Adams, appearing as the face of AGL for fall.

The brand just opened its first New York showroom at 130 West 57th Street, and plans to launch online in the U.S. in 2017, at which time AGL will re-launch its Web site. AGL went online in Europe two years ago, “and we’re already at break-even,” reported Sara, who heads AGL’s sales department. “We don’t have stock, but only produce on demand, which gives us high flexibility,” she explained. The almost 60-year-old firm currently has sales of 32 million euros, or $36.3 million at current exchange, and has been booking 10 percent gains each year, she said.

All mothers of young children, the sisters were heading back to Montegranaro in the Italian Marche region the next day. “No, we don’t do children’s shoes or have plans to do so,” said Vera, “but the kids love to draw shoes, and even make books of them — look books. Our goal, at heart,” she continued, “is to introduce our children — not all, but some of them — into the company. This is a family jewel, and it’s so beautiful to be able to work with your sisters, and learn from your parents,” she remarked.