Comme des Garçons and COS were among fashion brands to take part. 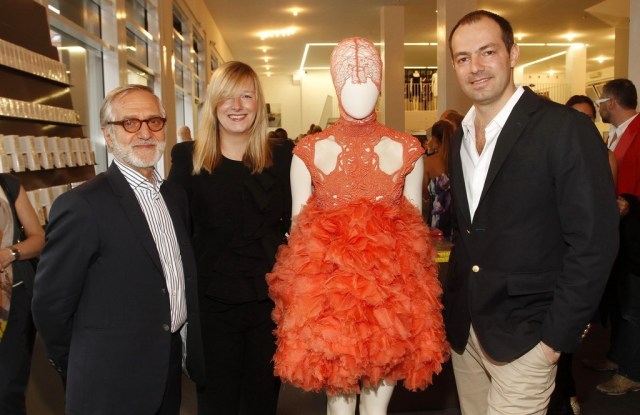 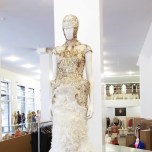 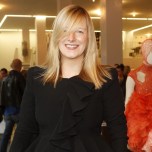 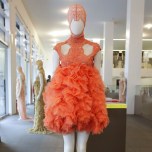 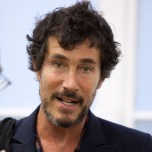 Berlin Gallery Weekend, which ran April 27-29, had hundreds of Berliners and assorted art-loving guests running to more than 50 officially listed openings – and then some. Comme des Garçons Black got a head start Thursday, with Mark Borthwick’s Polaroid work “Fountains of Ardor” in its new back-store projection space. COS feted a luminous collaboration with multimedia artist Carsten Nicolai, while The Corner simply celebrated the art of fashion itself with a still-life presentation of 20 recent Alexander McQueen creations and a reception hosted by the brand’s creative director Sarah Burton.

“This is so beautiful. I haven’t seen anything this beautiful in a long time. It’s magic,” raved artist and photographer Alexander Vethers, surrounded by 20 mannequins dressed in runway looks from the Alexander McQueen spring-summer 2012 collection at Berlin’s designer emporium The Corner. Premium Exhibition co-founder Anita Tillmann gushed on, saying, “It’s breathtaking. And the level of workmanship. This is really what fashion is about – to create dreams, fantasy and something not in our everyday life – though I’d happily wake up every morning to wear this.”

Nor could The Corner’s co-owner Josef Voelk contain his enthusiasm, emitting an endless stream of “Ohs” as he pointed out this detail or that intricacy of the dresses and accessories on display.

Along with Lanvin, Alexander McQueen is the store’s bestselling collection, but what was on view “is primarily runway and not really for sale. Though, in general, we do sell the dressy stuff,” said Voelk. The Corner’s presentation was accented with skull-infested artworks by the likes of Damien Hirst, Cindy Sherman and Haruko Maeda, courtesy of the Olbricht Collection. But for many, the real highlight was seeing McQueen creative director herself.

In Berlin for only one day (since she had to return to London to shoot an ad campaign over the weekend), Sarah Burton soaked up some architectural sightseeing round Gendarmenmarkt prior to The Corner’s reception.  “It’s nice seeing the pieces again,” she told WWD. “You never look at the collection after you do it, and it’s nice to see things up close. And this dress here,” she added, pointing to a floor-length extravaganza with a golden headdress and bodice. “We’ve had a least four couture orders for this one. So these are pieces that people want to buy and collect.” — Melissa Drier

Already a destination for Berlin’s arty crowd, Comme des Garçons Black inaugurated its in-store “projection surface” on the eve of Gallery Weekend last Thursday with an exhibit by Mark Borthwick. The London-born, Brooklyn-based photographer has collaborated with Comme des Garçons, Maison Martin Margiela and Hussein Chalayan, and his work is featured in both fashion and arts magazines.

Sharing the shop’s back room with some plants and still lifes, Borthwick said he was out to “create an intimate space. When you walk into a gallery, it kind of slows down time.”

The walls were dotted with drawings, notes and his signature Polaroids: accidental color-infused moments resulting from exposing Polaroid (or these days, Fuji film) to light. He discovered his favored technique when a Polaroid fell behind his desk and he found it six months later. “Most of my work is a mistake. When you normally take a photograph you know. I like not to know,” he emphasized. When he opens the back of a camera and exposes it to light, images can get lost. “As light infiltrates, you never know. It’s a surprise,” explained Borthwick.

A select crowd was also invited to an after-show surprise: one of Borthwick’s equally hard-to-pigeonhole concerts. For those who missed him and his guitar at the Grüne Salon, he’ll be back in Berlin this summer for a cooking performance at Galerie Neue. — M.D.

Swedish monochrome specialist COS hooked up with multimedia artist Carsten Nicolai, who created an exclusive installation for the brand’s store on Neue Schönhauserstrasse 20, in the Hackescher Markt area, during Berlin Gallery Weekend. This is COS’s latest arts endeavor following its presence at the Frieze Art Fair in London with a short film directed by Karan Kandahar. The installation will be on display for two weeks, and to toast the event, 250 guests converged on Berlin’s HBC Club Thursday night for a viewing of a film by Nicolai, plus culinary delights and music by DJ Sunny.“I think it is pioneering for COS to work on such art projects,” noted Nicolai. The installation is based on the principle of light reflection. A magnetic tape loop is illuminated with the concentrated light beam of a spotlight. Through the constant motion of the magnetic loop, its shape continuously changes, and the visual result of the reflection produces a film of light and shade. “I am working on loop structures,” he said. “The rough idea was to generate a form that is constantly redesigned.”

Maria Honda, brand director for COS, said, “We are proud to work with a visionary artist like Nicolai.” As for the company’s upcoming plans, new market entries are slated for May, when COS opens its first store in Milan, Helsinki and Vienna. Hennes & Mauritz’s higher-end line, COS currently has 46 stores in the U.K., Germany, the Netherlands, Denmark, Belgium, France, Spain, Ireland and Sweden. — Norma Quinto