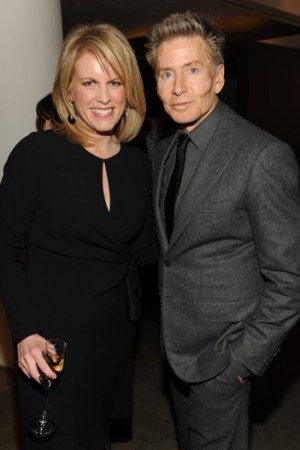 BEST BETTS: Kate Betts’ book party Tuesday night at Milk Studios drew an eclectic crowd of designers — including Calvin Klein and Reed Krakoff — socials and magazine types. Thrown by former White House social secretary Desirée Rogers (now chief executive officer of Johnson Publishing Co.) and Estée Lauder Cos. Inc. group president John Demsey, the event celebrated “Everyday Icon: Michelle Obama and the Power of Style” (Clarkson Potter), Betts’ first book. “Style is about so much more than what you’re wearing,” Betts said. “It all adds up — your clothing, the way you carry yourself, your charisma. Mrs. Obama has all three and that makes her iconic.” Added Krakoff: “She has a personal take on fashion. She wears what she loves, and that’s what an icon does.”

CHANGE OF PLANS: Even a retail pro like Michael Kors isn’t immune to construction delays. Kors was planning to celebrate his 30th anniversary at his new flagship at 790 Madison Avenue next Wednesday, but had to move venues because the store now won’t be ready until next month. It didn’t take long, however, for Kors to come up with a suitable alternative. He will instead fete the milestone with an intimate gathering for friends and family at Bemelmans Bar at The Carlyle, one of his favorite haunts.

TRANSFORMERS: When can a leather jacket also be a nylon jacket? When Maison Martin Margiela is involved. In a collaboration with hip New York retailer Opening Ceremony, Margiela has created a capsule collection for next fall-winter with its MM6 range spanning women’s accessories and clothing, much of which transforms into separately wearable garments, including detachable linings and sleeves. The 20-piece line will be launched in September.

IN A BUBBLE: With no show to speak of, new kids on the block Anna Zeman and Aja Singer have turned to blogger Susie Bubble to spread the word about their Alex & Eli collection. Bubble, whose Style Bubble site attracts 25,000 visitors daily, will wear their designs today at New York shows. Photos of her Alex & Eli ensembles and video footage of her guest styling the collection will be shipped out via social media in the coming days. Bubble is not being paid for her time but she did get first dibs on the fall line.

DRESS TO IMPRESS: In honor of fashion week, Carmen Marc Valvo will ring the closing bell today at NASDAQ. The designer will soon be talking up his new book, “Dressed to Perfection: The Art of Dressing for Your Red Carpet Moments” at his presentation Sunday and at Neiman Marcus stores in the coming months. There will also be an installation of his designs and a book signing Feb. 24 at the FashionOpolis in LIM College’s townhouse.

IN THE SKY: For the eighth consecutive season, the American Express skybox is back for Mercedes-Benz Fashion Week. This season, American Express has launched a new companion Web site, amexskyboxreport.com, that will include video clips of designers, news in and around the tents and interviews with celebrities such as Zooey Deschanel and Sting. A spokeswoman said that all of the looks from today’s CFDA show will be posted tonight, with direct links to purchase.

GOING FOR THE SILVER: As far as Ruffian’s concerned, the gold rush is over. For their runway show on Friday, designers Brian Wolk and Claude Morais enlisted the Silver Promotion Service — the marketing arm of the Silver Institute, which aims to enhance the image of silver jewelry. Ruffian’s fall 2011 line is entitled Tuxedo Park, and Wolk said of the collaboration, “Tuxedo Park is a collection inspired by Deco-aged elegance. What is Deco without silver?” Jewelry brands including Ippolita, Robert Lee Morris and Thistle & Bee contributed silver designs to be worn with Ruffian’s collection. Wolk and Morais also created their own silver jewelry: a sterling silver wing tipped collar, which will make its debut at their show.

FOR A CAUSE: Kwiat celebrated its partnership with charity:water at the Surrey Hotel on Tuesday night. The jeweler introduced a limited edition leather, silver and diamond bracelet that retails for $100. All profits from the collection will fund charity:water. Among the 100 plus people in attendance were Greg Kwiat, Scott Harrison (founder of charity:water), Spencer Wadama, Emma Snowden Jones, Brent Ridge and Darren Bettencourt and Josh Kilmer. It seems the collaboration is off to a promising start — the event sold out all of its bracelets, with an additional 200 online sales Wednesday.

DESIGN SCHOOL: A pre-fashion week panel for New York City public school students gave budding fashionistas an inside look at the industry Tuesday night at the Rubenstein Atrium at Lincoln Center. Wall Street Journal columnist Teri Agins moderated a conversation between Gap Inc. designer Patrick Robinson, stylist Lori Goldstein, BCBG Max Azria chief creative officer Lubov Azria and Saks Fifth Avenue’s Terron Schaefer. Panelists at the talk — co-sponsored by the CFDA and the New York City Department of Education — shared insights on the ups and down of the industry, uttered encouragements, stressed the importance of a college degree and listed some all important things not to do during an interview.

“If you show up in heels, I’m always a little wary,” said Azria to a room full of students dressed for the occasion in, well, heels — when emphasizing that fashion is hard work.

Before Robinson had to dash off to meet “the big boss in town from San Fran” he reflected on the ups and downs of his career, and reminded students that talent, “is that special thing we all have.” Schaefer shared anecdotes from the business side, and bemoaned the lack of industry folks who were both nice and smart. Goldstein added that her interns “generally don’t get paid, but internships are a privilege, you’re really learning a craft.”

Despite all the pro tips being handed out, the attention level in the room rose noticeably when Azria shared an anecdote about dressing Angelina Jolie. Presented with three dresses, Azria said Jolie consulted Brad Pitt on the final decision. “He has a very good eye, he’s an architect,” noted Azria. Apparently, Pitt prefers the missus in boat necks.

KARL’S SNAPS: An exhibit showcasing the photography of Karl Lagerfeld, which made its debut in Paris last fall, will be housed in Renaissance-era museum Chiostro del Bramante in Rome from Feb. 16 to April 10. The show, dubbed “Percorso di Lavoro,” covers everything from Chanel and Fendi advertising campaigns to personal snapshots of his life in Paris, where the designer has lived since 1953.